'The Last of Us Part II': Ellie is on the run in new cinematic trailer

June 3 (UPI) -- Ellie must contend with the living and the dead in a new cinematic trailer for The Last of Us Part II.

While being chased by armed men inside a dark building, Ellie finds herself face-to-face with the zombie-like Infected.

She quickly carves her own path through the building and makes it outside. Ellie then pulls out her gun and closes her eyes before rushing back out into battle.

Ellie is also featured singing a song and playing a guitar around a campfire.

The Last of Us Part II is set to be released for the PlayStation 4 on June 19.

Developer Naughty Dog has called the title their largest and most ambitious game yet. Players will get to explore the Pacific Northwest including a former quarantine zone in Seattle and take on new forms of the Infected along with two warring factions.

Movies // 15 minutes ago
Kristen Stewart struggles with royal divorce in 'Spencer' trailer
Sept. 23 (UPI) -- NEON released the official trailer for "Spencer" on Thursday. Kristen Stewart stars as Princess Diana struggling through a weekend near the end of her marriage to Prince Charles (Jack Farthing). 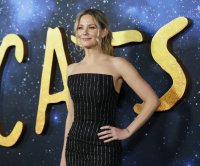 Entertainment News // 1 hour ago
Jennifer Nettles to return to Broadway in 'Waitress'
Sept. 23 (UPI) -- Jennifer Nettles will take over the role of Jenna from Sarah Bareilles in the Broadway musical "Waitress."

Entertainment News // 3 hours ago
Prince Harry, Meghan Markle visit One World Trade Center in New York
Sept. 23 (UPI) -- Prince Harry and Meghan Markle made their first major in-person appearance together since their move to the United States during a trip to New York on Thursday.
Advertisement