May 24 (UPI) -- Actor Cheyenne Jackson posted on Instagram this weekend a photo of his head scar from several hair-replacement surgeries.

"I've been DREADING this day for 17 years. The day when my horrible secret would be revealed. No, this gnarly scar across my head isn't from life-saving brain surgery, nor did I narrowly survive a shark attack. It's worse. (At least in Hollywood...) I had hair transplant surgery. 5 of them, to be exact over 14 years," Jackson wrote Saturday.

The 44-year-old Glee, 30 Rock and American Horror Story alum added: "My inner monologue is 'Really Cheyenne? With everything that's going on in the world, you're CONFESSING that you had hair surgery? Get over yourself.' I get it, but I'm admitting this really, to RELEASE how much shame & anxiety I've had about people finding out for years. I started losing my hair around 22. My older brother was balding too, but was way braver & cooler & just shaved his off. It was really emotional for me to watch it fall out & I felt less attractive & truly less like myself as the days went on, so I saved up and got my first surgery at 28. I hid it from everyone. It was painful & expensive but I started to feel better about myself."

Jackson said he decided to share his secret in the hopes it would inspire someone else to unburden themselves by disclosing something they have been hiding.

"Let it go," he urged. "What I've learned during this pandemic is that (expletive) like this just doesn't matter. I'm trying to teach my kids to accept themselves & to be proud of who they are, & to put value on things that are IMPORTANT & REAL so as their father, the example should start with me. This is that. I'll go first. #ShowYourScars."

First two episodes of 'Kirby Jenner' now on Quibi Jesse Tyler Ferguson to host 'We Are One Public' concert on June 1 Cardi B shows off huge, floral back tattoo Amanda Bynes says she is 'back on track and doing well' 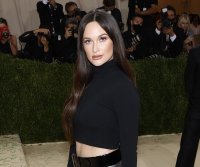