May 12 (UPI) -- A remastered version of Tony Hawk's Pro Skater 1 and 2 is coming in September.

Tony Hawk, the professional skateboarder who inspired the video game series, announced the news Tuesday on his 52nd birthday.

"Happy Birthday to me! #THPS," Hawk wrote alongside a poster for the remaster on Twitter.

"#THPS is back! Original maps, original skaters, and songs from the original soundtrack... plus new features. Thanks to all the fans of our series for keeping this dream alive," he added.

Activision, which published the original games, confirmed Vicarious Visions studio will release the remaster for PS4, Xbox One and PC on Sept. 4.

The new Tony Hawk Pro Skater 1 and 2 will feature the original full roster of skaters, including Hawk, Steve Caballero, Geoff Rowley and Elissa Steamer. The characters come with their own Special Moves and new tricks.

Other features include revamped versions of Create-A-Skater and Create-A Park, and local co-op or online multiplayer game modes. The game will be presented in 4K resolution and run at 60 frames per second.

The Tony Hawk's Pro Skater 1 and 2 remaster retails for $39.99 and is available to pre-order now. A digital deluxe version costs $49.99 and includes unique content and gear. 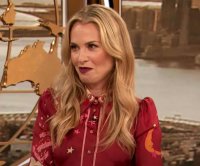 TV // 8 hours ago
Leslie Grossman says adoption has been a 'life-affirming experience'
Oct. 21 (UPI) -- Leslie Grossman discussed being adopted and adopting her daughter Goldie while appearing on "The Drew Barrymore Show."