Hilton, 39, shared a photo with Reum, an entrepreneur, Wednesday on their one-year anniversary as a couple.

The picture shows Hilton and Reum sharing a kiss at an event. Hilton voiced her love for Reum in the caption.

"Happy Anniversary my love. My favorite thing to do is make memories for you. Your kisses are magical. I love being yours and knowing you're mine," she wrote.

Models Simi Kowalski and Yanet Garcia were among those to congratulate Hilton and Reum in the comments.

Hilton shared another photo with Reum Thursday on Instagram Stories.

Paris Hilton shared photos with her boyfriend, Carter Reum, on their one-year anniversary as a couple. Photo by parishilton/Instagram Stories

Hilton was previously engaged to actor Chris Zylka, from whom she split in 2018. Hilton said in the April issue of Cosmopolitan U.K. that ending the engagement was the "best decision" she's "ever made" in her life.

"I just don't think [he] was the right person and I feel like I'm an incredible woman and I deserve someone so amazing," the socialite and entrepreneur said.

"It just didn't feel right," she added. "I've worked way too hard to just give my life to someone. They have to be perfect."

During an episode of Miley Cyrus' Bright Minded: Live with Miley in March, Hilton voiced her love for "OG" pop stars, including Britney Spears and Christina Aguilera.

"I love just all these girls, especially right now, just women's empowerment and girls coming together," she said. "I think it's just such an amazing time and such an incredible time in music." 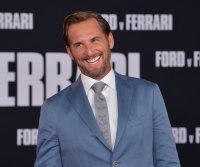 Movies // 22 hours ago
Fourth 'Hotel Transylvania' film set for fall release
June 19 (UPI) -- The fourth and final installment in Sony's "Hotel Transylvania" film franchise will be released in theaters Oct. 1 instead of July 23 as planned.