WWE star John Cena and his girlfriend Shay Shariatzadeh attend the premiere of "Dolittle." WWE has announced that WrestleMania 36 will still be taking place but will not feature a live audience due to COVID-19. File Photo by Jim Ruymen/UPI. | License Photo

"Today" weatherman Al Roker gave a forecast on Tuesday from his home as he self-isolates. File Photo by John Angelillo/UPI | License Photo

March 17 (UPI) -- WWE has announced that WrestleMania 36 will be airing from the company's Performance Center in Orlando on April 5 with no live audience due to COVID-19.

WrestleMania is WWE's biggest show of the year and is considered the Super Bowl of professional wrestling. The 36th edition was originally set to take place at Raymond James Stadium in Tampa Bay, hosting tens of thousands of fans. The show has been promoted with a pirate theme.

"In coordination with local partners and government officials, WrestleMania and all related events in Tampa Bay will not take place. However, WrestleMania will still stream live on Sunday, April 5 at 7 p.m. ET on WWE Network and be available on pay-per-view. Only essential personnel will be on the closed set at WWE's training facility in Orlando, Florida to produce WrestleMania," WWE said in a statement.

WWE has used the Performance Center recently to produce episodes of it's weekly television programs such as Raw and SmackDown without any fans due to COVID-19. This will be the first time ever WrestleMania has no live fans in attendance.

Al Roker of NBC's Today gave a weather forecast from his home after he was exposed to a co-worker with COVID-19.

Roker is self-isolating from home and informed viewers about the weather from his kitchen by using an iPad. Rooker was not joined by any of his NBC News co-workers and noted that he was able to sleep in as he didn't have to drive to work.

The COVID-19 spread has also caused Elton John to postpone a number of tour dates in the U.S. and iHearRadio to postpone the 2020 iHeartRadio Music Awards.

The virus has halted production on Season 2 of Netflix's The Witcher and Marvel's slate of Disney+ shows such as The Falcon and the Winter Solider, WandaVision and Loki. 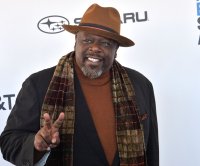 Entertainment News // 3 hours ago
Emmy Awards: How to watch, what to expect
Sept. 17 (UPI) -- The 73rd annual Emmy Awards will air live Sunday from the Microsoft Theater in Los Angeles.

Entertainment News // 5 hours ago
What to stream this weekend: 'The Morning Show' S2, Emmys
Sept. 17 (UPI) -- "The Morning Show" Season 2, the 73rd annual Emmy Awards, "Sex Education" Season 3, "Lady of the Manor," "Uprising" and "Everybody's Talking About Jamie" are some of the entertainment options streaming this weekend.

TV // 6 hours ago
'You' Season 3 trailer shows Joe, Love move to suburbs with son
Sept. 17 (UPI) -- "You," a psychological thriller series starring Penn Badgley and Victoria Pedretti, will return for a third season on Netflix in October.
Advertisement