Rihanna to be honored at NAACP Image Awards

BREAKING: Rihanna will receive the prestigious President's Award during the 51st #NAACPImageAwards. The President's Award is presented in recognition of a special achievement and distinguished public service. Make sure you are tuned-in to @BET on Feb. 22 at 8/7c. pic.twitter.com/AsFna7jdpk— NAACP Image Awards (@naacpimageaward) February 4, 2020

The National Association for the Advancement of Colored People (NAACP) announced in a press release Tuesday that Rihanna will receive the President's Award at the awards ceremony Feb. 22 in Pasadena, Calif.

"Rihanna has not only enjoyed a groundbreaking career as an artist and musician but has also distinguished herself as a stellar public servant," NAACP president Derrick Johnson said. "From her business achievements through Fenty to her tremendous record as an activist and philanthropist, Rihanna epitomizes the type of character, grace, and devotion to justice that we seek to highlight in our President's Award."

Rihanna is a nine-time Grammy winner known for the singles "Umbrella" featuring Jay-Z, "Don't Stop the Music," "Only Girl (In the World)," "Diamonds" and "Love on the Brain." She released her eighth studio album, Anti, in 2016.

As a fashion designer, Rihanna partnered with LVMH in 2019 to re-launch her fashion label, Fenty, as a luxury brand. She is the first woman to create an original brand at LVMH and the first woman of color to head a LVMH maison.

In addition, Rihanna launched the Clara Lionel Foundation in 2012. The foundation supports and funs education and emergency response programs around the world.

The NAACP Image Awards will air live on BET. 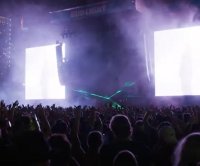 TV // 3 hours ago
'Ragnarok' Season 2 trailer shows Magne prepare for battle
May 18 (UPI) -- "Ragnarok," a Norwegian-language fantasy series starring David Stakston, will return for a second season May 27 on Netflix.