Comedian Tom Papa said he keeps subjects like politics and current events out of his comedy because he wants the material to be "timeless." Photo courtesy of Netflix

Comedian Tom Papa said he knew he wanted to have a career in stand-up since the seventh grade. Photo courtesy of Netflix

Papa, 51, co-host of What A Joke With Papa and Fortune on SiriusXM's Netflix Channel, told UPI in a recent interview that the title of You're Doing Great! is meant to be taken at face value, without a trace of irony.

"I actually take pride in not being a cynical comedian," said Papa, who is also a writer and performer for nationally syndicated radio show Live From Here. "Most comedy lives in the negative space. I'm naturally an optimist, and I realized I can be positive and hopeful and be funny at the same time. That's what I want people to realize. 'You're doing great' actually means that you are winning if you have a simple, good life."

The performer said he feels comedy has "enough people that deal in irony and cynicism," freeing him up to be more "positive and sincere," even if it occasionally might be seen as "corny" to some audiences.

"We're kind of craving sincerity right now, and I'm not afraid to say that I really enjoy something, or I really think there's a reason for optimism. Sincerity is sometimes laughed at by the cool kids, but that's the world I deal with."

Papa said the sincerity in his comedy results from his personality and worldview.

"As you develop as a comedian through the years, if you're striving for anything, it's to be more honest and truthful. And it's only with developing more skill and better writing that I was able to translate what I really am into my stand-up," he said.

You're Doing Great! deals mostly with stories and observations stemming from Papa's life and relationships with his family. He said keeping subjects like politics and world events out of his material is a conscious decision inspired in part by comedian and actor Lily Tomlin.

"She was talking about how she likes to deal with comedy that's timeless. Current event comedy is disposed of much quicker. You talk about something in the news, and it's gone inside of a couple of months. That really resonated with me, because the places I like to write about are family stuff, aging, anxiety -- things that are more timeless."

Some of the most prominent characters in Papa's comedy are his family -- his parents, wife and two daughters.

"My wife's got a great sense of humor about it, my parents a little less so, because they get teased by their friends. My kids, I'm not even sure that they know I'm a comedian," he laughed.

Papa also is preparing to release a book in May titled You're Doing Great!: And Other Reasons to Stay Alive. He said the book has more in common with his stand-up special than just the title, but it's more than a mere transcription of his comedy.

"A couple of the jokes from the special are mentioned in the book, but in a book you get to expand on it a lot more and go much deeper. Take that same theme and go much further with it," he said.

Both the special and the book deal heavily with the idea of overcoming feelings of inadequacy.

"We have this overwhelming feeling in the culture that we're not doing enough, and that we're falling behind our neighbors and other people in the culture, like when you see people on social media," Papa said. "I just took stock of that and realized, 'No, we're actually doing pretty great, this is what life is. A simple life is what wins.'"

Papa also lends his comedic sensibilities to What A Joke With Papa and Fortune, the SiriusXM radio show he hosts with fellow comedian Fortune Feimster. He said stand-up and radio might seem superficially similar, but he sees them as "totally different forms."

"I was actually talking with my friend Nikki Glaser the other day, and she was saying her radio show was helping her develop a lot of material for her act," Papa recalled.

He said the other comedian's perspective was surprising "because I haven't gotten anything from the radio show that's been in my act. I do see them as really, really different."

Papa said he sees himself as more of a writer.

"That's where I'm spending most of my time and what I really enjoy doing," Papa said. "This is the second book in a couple of years. I write for Live From Here, do my 'Out. In. America.' monologue, and I've got scripts and I'm writing my stand-up -- I'm writing all the time."

Papa said he has some "improvisational skill," which he puts to use during his stand-up act when he's "riffing off the audience."

"I think that's the closest to what's happening on the radio. But I would never say I'm an improviser. I'm definitely a writer first," he said.

Papa said he's identified the next place he would like to test his writing skills: the big screen.

"I've written on movies, but I've never created my own film," Papa said. "I'm starting to get that kind of itch. ... While I think it's a ways away, and I don't even have a clear idea of what I would do with it, I am for the first time starting to think of that."

The multi-talented entertainer said that no matter where his other projects lead him, he has no plans to give up stand-up comedy.

"Since I was in seventh grade, this is what I wanted to do," he said. "I wanted to do it because I love making people laugh, and I knew that I could do it as a kid. There's something just genuinely fun about all of us getting together and sharing a laugh about these common experiences and anxieties and tensions that we're all dealing with. It's just simply the most alive, relatable, fun thing you can do.

"I love writing, and I love putting out my books, and I'm going to do that for a long time, but that's a different kind of satisfaction. It's not purely as much fun as walking into a club or a theater and doing your act. Nothing comes close to that." 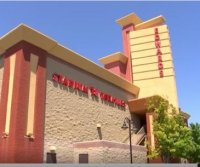 Entertainment News // 10 hours ago
Tik-Tok star Anthony Barajas dead at 19
Aug. 1 (UPI) -- Tik-Tok personality Anthony Barajas has died, days after he was shot in a California movie theater. He was 19. 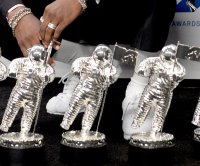