Jan. 23 (UPI) -- Gwyneth Paltrow thinks the "This Smells Like My Vagina" candle sold by her company, Goop, is "punk rock."

The 47-year-old actress and Goop founder discussed the product during Wednesday's episode of Late Night with Seth Meyers after the item went viral online.

"So, it sort of started as a joke," Paltrow said. "I was with the nose, Douglas Little, for his brand, Heretic, and we were kind of messing around. And I smelled this beautiful thing, and I was like, 'This smells like my vagina.' And I was kidding, obviously."

"And we were on mushrooms," she jokingly added.

"I mean, I think women, a lot of us have grown up feeling certain degrees of shame around our body or whatever. So this is just a little bit of, you know, subversive candle for all of us out there," Paltrow said.

The candle, created by Heretic and sold on Goop, trended and made headlines last week for its unexpected name and $75 price tag. The product quickly sold out and now has a wait list.

"The psychedelics episode is really interesting," Paltrow said. "There's a government-funded study right now going on to study the effects of taking psychedelics for PTSD. I think it will soon be legalized to help various kinds of trauma."

In the February issue of Harper's Bazaar, Paltrow voiced her love for actress Dakota Johnson, who is dating Paltrow's ex-husband, Chris Martin. Paltrow and Martin have two children, daughter Apple and son Moses. Martin said on The Ellen DeGeneres Show last week that he recently embarrassed Apple at work. 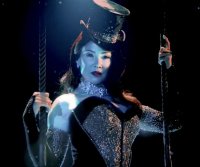 TV // 18 hours ago
'The Chi': Showtime renews drama series for Season 5
Aug. 2 (UPI) -- "The Chi," a series created by Lena Waithe and starring Jacob Latimore, Michael V. Epps and Alex Hibbert, will return for a fifth season on Showtime.