Michael Douglas shared a photo on Instagram of himself giving Kirk Douglas a kiss on the head. He called his dad, an actor known for The Bad and the Beautiful, Lust for Life and Spartacus, a "living legend" in the caption.

"Happy birthday Dad! You are a living legend and your entire family sends you all the love in their hearts! #KirkDouglas #103," Michael Douglas wrote.

Zeta-Jones posted a picture on her own account of Kirk Douglas sitting on her knee.

Michael Douglas said on Jimmy Kimmel Live! in November that his family would be having a low-key birthday celebration for Kirk Douglas after three years of big blowout parties.

"Okay, so he was 100. Big birthday, big birthday. The trouble is, when you're 100, you don't really want a big birthday," Michael Douglas said of his dad. "I threw a big party for him, it was great."

"He's incredible. He doesn't get around a whole lot but his mind's all there, so I got him an iPad and I got him FaceTime," Michael Douglas said. "Loves it. It's fantastic."

Michael Douglas has two children with Zeta-Jones, Dylan and Carys, and is also dad to Cameron Douglas. Cameron Douglas welcomed a daughter, Lua, in 2017, making Kirk Douglas a great-grandfather.

Entertainment News // 16 hours ago
Bar Refaeli gives birth to baby No. 3
Jan. 18 (UPI) -- Supermodel Bar Refaeli announced Saturday she has given birth to her third child. 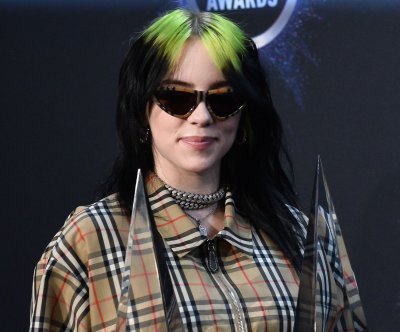 Music // 21 hours ago
Roddy Ricch's 'Antisocial' tops the U.S. album chart
Jan. 18 (UPI) -- Rapper Roddy Ricch's "Please Excuse Me For Being Antisocial" is the No. 1 album in the United States this week.