'Beetlejuice' to end its Broadway run in June

Final block of tickets is on sale through June 6 only, and we'll be having fun until our very last Day-o at the Winter Garden Theatre! pic.twitter.com/FEVjAQbba7— Beetlejuice on Broadway (@BeetlejuiceBway) December 9, 2019

Dec. 9 (UPI) -- The Broadway musical Beetlejuice is set to close at the Winter Garden Theatre on June 6, its producers announced Monday.

The New York production -- which opened on April 25 -- was nominated for eight Tony Awards, including Best New Musical.

Plans are now being made for a national tour of the show to begin in the fall of 2021.

Based on the 1988 movie of the same name, Beetlejuice follows a recently dead couple who enlist a demon to help them scare off the eccentric family who moved into their home.

Movies // 8 hours ago
'Lost Boys' remake in the works with Noah Jupe, Jaeden Martell set to star
Sept. 18 (UPI) -- "A Quiet Place" actor Noah Jupe and "It" star Jaeden Martell have signed on for roles in Warner Bros.' planned remake of the 1987 teen vampire classic "The Lost Boys." 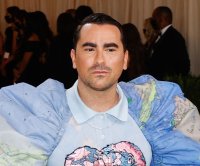