Singer Jung Joon-young has been sentenced to six years in prison for sexually assaulting women at alcohol-fueled parties in 2016. Photo courtesy of Yonhap

Nov. 29 (UPI) -- Korean singers Jung Joon-young and Choi Jong-hoon were sentenced to several years in prison Friday after they were convicted on rape and other charges.

Jung's sentence was a year longer because he was also convicted of secretly filming himself having sex with women too drunk to give their consent, then sharing the videos with friends online.

"The accused perpetrated sexual crimes against multiple women, degrading women and treating them as mere tools of sexual pleasure," Judge Kang Seong-soo said as he announced his verdict, according to The New York Times​. "It's hard to fathom the pain the victims must have​ suffered."

The men were ordered to undergo 80 hours of sexual violence treatment and are prohibited from working with children.

"I deeply regret my foolishness and I feel great remorse," Jung said during his testimony. "From now on, I shall only ... live in remorse." He quit the music industry in March.

Jung and Choi both insisted during the trial that the acts were consensual.

TV // 11 hours ago
'Black-ish' ending, 'Rebel' canceled
May 15 (UPI) -- ABC has renewed its Anthony Anderson-led sitcom, "Black-ish," for an eighth and final season. 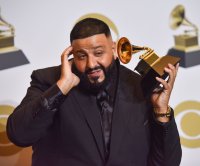