Sept. 23 (UPI) -- WWE stars The Miz and his wife Maryse Ouellet have announced on Instagram the birth of their second child together, a baby girl.

"We've got the whole world in our hands. Welcome, Madison Jade Mizanin," The Miz said on Sunday alongside a photo of the newborn's foot being held.

Madison was born on Friday and weighed seven pounds, 15 ounces.

The Miz, 38, and Maryse, 36, announced in February that they were expecting their second child. The WWE power couple and stars of reality series Miz & Mrs., are already parents to 1-year-old daughter Monroe Sky.

The Miz is set to host alongside Charlotte Flair WWE Smackdown's Greatest Hits on Friday on Fox at 8 p.m. ET. The hourlong special will showcase some of the greatest moments from WWE's long-running blue brand before Smackdown switches to Fox on Friday nights starting on Oct. 4.

TV // 3 minutes ago
'COVID free' Stephen Colbert returning to 'Late Show' Monday
May 16 (UPI) -- Comedian Stephen Colbert will be back in his New York TV studio Monday to host "The Late Show." 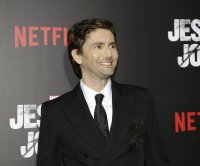 TV // 13 hours ago
David Tennant, Catherine Tate to guest star on 'Doctor Who'
May 15 (UPI) -- The BBC announced Sunday that David Tennant and Catherine Tate are filming new "Doctor Who" scenes to air next year, timed to the sci-fi show's 60th anniversary celebrations.

Movies // 17 hours ago
'Doctor Strange' tops North American box office for 2nd weekend with $61M
May 15 (UPI) -- "Doctor Strange and the Multiverse of Madness" is once again the No. 1 movie in North America, earning an additional $61 million in its second weekend of release, BoxOfficeMojo.com announced Sunday.