Actress Megan Fox has filed legal documents to have the divorce proceedings she initiated dismissed. She is married to actor Brian Austin Green. File Photo by Jim Ruymen/UPI  | License Photo

People.com said Fox cited irreconcilable differences as the reason she wanted to dissolve the union. Work-family balance was reportedly at the center of the tensions.

Although they reconciled soon after splitting up, Fox did not move to officially end the divorce proceedings until last week, E! News said.

TV // 2 hours ago
Aidy Bryant: 'Shrill' character's battle 'is never over'
LOS ANGELES, May 6 (UPI) -- Aidy Bryant says the final season of "Shrill" will show her character achieve a modicum of success and self-esteem, but will struggle with those things for the rest of her life. 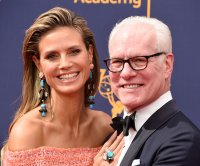