Andy Cohen recounts son Benjamin's birth: 'He was so alert'

Feb. 13 (UPI) -- Andy Cohen says his son was "so alert" following his birth this month.

The 50-year-old television personality shared photos and new details about his baby boy, Benjamin Allen, in the Feb. 25 issue of People after welcoming the infant via surrogate.

"I was in the delivery room. I had been hoping that he would have a full head of hair, and he really overdelivered," he said of Benjamin, who was born with dark brown hair. "That was the first thing you see, the head of hair coming out. And I was amazed."

Cohen said he cut the umbilical cord himself during his son's birth. He bonded with his baby boy by sharing skin-to-skin contact after the delivery.

"He was so alert for the first two hours. His eyes were wide open. He didn't cry; he was just calm," the star said. "I kind of have no words for it."

The Watch What Happens Live host said he worked with an "incredible" surrogate based in California. He explained his decision to become a single parent in the interview.

"It's not something in your mind -- 'Oh, I want to do this alone.' But I like being alone. I didn't want to wait," the television personality said. "To me it would have to be a very special person to say, 'Let's do this together.'"

"This is my son!! I grew up reading @People cover to cover, at a time when being gay meant there was no way to have a family. Now I'm honored to be featured on the magazine's cover," he wrote.

Cohen announced Benjamin's birth in an Instagram post Feb. 4. The new dad came under fire last week after sharing a photo of himself with his son on a plane. 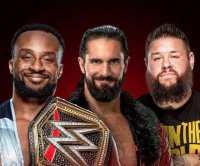 TV // 7 hours ago
Maya Rudolph, Andy Samberg stuffed selves hosting 'Baking It'
LOS ANGELES, Nov. 30 (UPI) -- "Baking It" hosts Maya Rudolph and Andy Samberg discuss the challenges of eating every confection made by contestants on the Christmas baking show, out Thursday on Peacock.

TV // 16 hours ago
'Chucky' renewed for Season 2, premiering 2022
Nov. 29 (UPI) -- Syfy and USA Networks have renewed "Chucky" for a second season ahead of the season finale on Tuesday. The series follows seven movies in the "Child's Play" killer doll series.