Conductor Gustavo Dudamel gets star on the Hollywood Walk of Fame 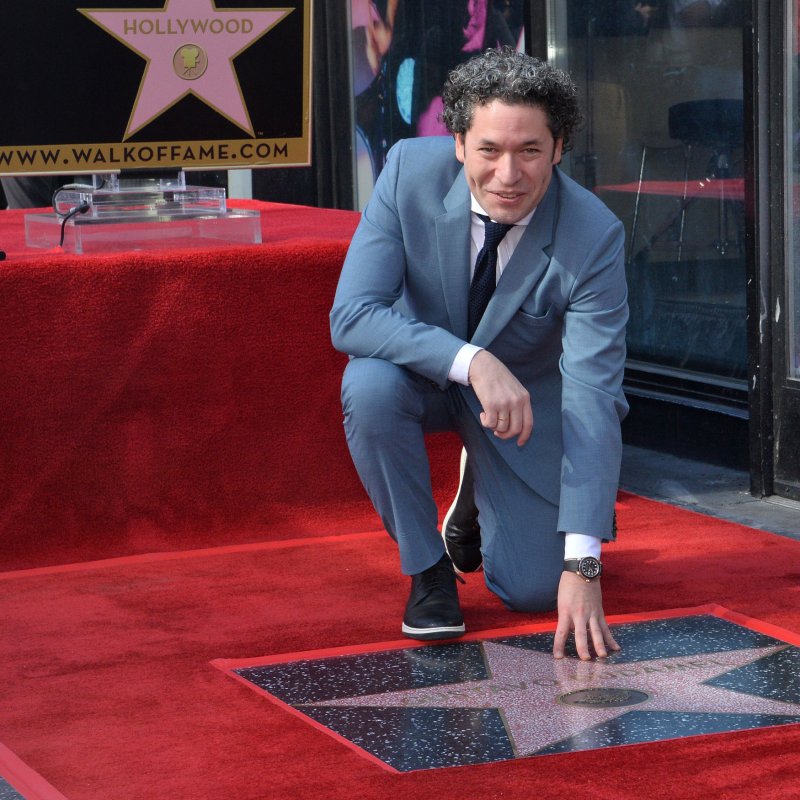 Venezuelan conductor and violinist Gustavo Dudamel was honored with the 2,654th star on the Hollywood Walk of Fame in Los Angeles Tuesday. Photo by Jim Ruymen/UPI. | License Photo

Jan. 22 (UPI) -- Venezuelan conductor Gustavo Dudamel received a star on the Hollywood Walk of Fame on Tuesday as he celebrated his 10th anniversary as music and artistic director of the Los Angeles Philharmonic.

Dudamel was presented the 2,654th star on the Hollywood Walk of Fame during a ceremony in front of the Musicians Institute on Hollywood Boulevard on Tuesday, four days before his 38th birthday. Composer John Williams and actress Helen Hunt spoke on his behalf.

"As the first Venezuelan to receive this great honor, this star also belongs to the people of Venezuela," Dudamel said. "In the desire that it will provide a small measure of hope and inspiration during such terrible times."

Dudamel emerged from Venezuela's acclaimed youth program of immersive musical training "El Sistema" and was hired as an assistant conductor with the Amadeus Chamber Orchestra in Barquisimeto at the age of 12.

When he was 17, Dudamel was appointed music director of the Simon Bolivar Youth Orchestra.

He won a Grammy for best orchestral performance for conducting "Brahms: Symphony No. 4." in 2012 and became the first classical musician to participate in the Super Bowl halftime show in 2016.

In two days Dudamel is set to begin conducting the Los Angeles Philharmonic in a series of four concerts of Williams' work including the scores of Jurassic Park, Schindler's List, Jaws, Star Wars, Harry Potter and Indiana Jones.

Williams showered praise on Dudamel during the ceremony, hailing him as an "approachable, charismatic force that brings us all together."

"It was there, listening to his rehearsals, that I deeply connected to your creative force, the intensity that you have and the passion you feel, and your true belief that music is making the world a better place," she said.

Dudamel delivered a loving message to his wife, actress María Valverde, who was in the crowd with his son, Martín, from his previous marriage.

Before ending his speech, Dudamel reflected on his accomplishment while offering words of encouragement.

"There are billions of stars in the universe. There are thousands of stars in the Hollywood Walk of Fame," he said. "Yet each star shines brightly on its own and has the ability to inspire and motivate. It reminds us that each of us has a purpose. All of us can make a difference and we share in the responsibility to light the way so that others may follow in our footsteps."

Music // 17 hours ago
Mamamoo soak up the sun in 'WAW' concept photo
May 17 (UPI) -- K-pop stars Mamamoo released a teaser photo for their forthcoming EP, "WAW," or "Where Are We."