The 22-year-old model showed off her bob haircut in a post Wednesday on Instagram Stories after completing a photoshoot.

The photo shows Baldwin wearing an orange t-shirt with a mountain print. The star's hair now falls just past her chin.

"on set w @vmagazine @hungvanngo," she captioned a picture from set. 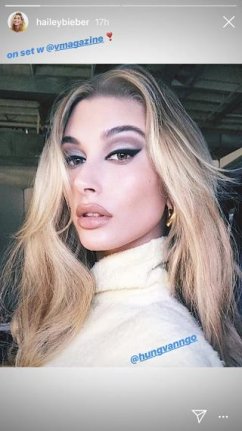 Baldwin returned to Instagram last week after taking a break from the social media site. She called out critics in a post Saturday following negative comments about her relationship with her husband, singer Justin Bieber.

"Being off of Instagram is the best thing ever. Whenever I take breaks from it I feel so much better, so much happy as a person... the second I come back on I get immediate anxiety, I get sad and worked up," the star wrote.

"It's hard to focus on your well-being and mental health when each time you open Instagram someone is tearing apart your job, or your relationship or essentially any of the things in your life that are positive," she said.

Baldwin and Bieber are longtime friends who announced their engagement in July. Bieber confirmed in November that he and Baldwin had quietly married.