Dec. 4 (UPI) -- Priyanka Chopra and Nick Jonas are giving fans a glimpse into their lavish wedding.

One photo shows Jonas kissing Chopra's hand at their Christian ceremony Saturday. The actress wears her custom Ralph Lauren wedding gown, which featured 2 million mother of pearl sequins and a 75-foot tulle veil, according to Hello!

Another picture shows Chopra and Jonas holding hands as they stand face-to-face at their Hindu ceremony Sunday. Chopra wore a red lehenga, a traditional Indian garment, from designer Sabyasachi Mukherji.

"Happiest day of my life. @priyankachopra," Jonas wrote on his account.

Chopra told People it was a special experience to have two ceremonies honoring her and Jonas' different backgrounds.

"It melted my heart," Chopra said. "Being able to have two big weddings, in India, with our closest family and friends was unbelievably special."

"I love that our wedding was a religious mash-up," she added. "We took beautiful traditions that we both grew up with and personalized them in a way that made sense for us."

Jonas said his emotions were running "especially" high during the Christian ceremony.

"You know you think your whole life about that moment," he said. "Honestly, I could not have imagined it would be as perfect as it was. It was highly emotional."

Chopra and Jonas got engaged in July after a couple months of dating. Jonas said in the January issue of Vogue that he told his mom he was going to marry Chopra after his third date with the actress. 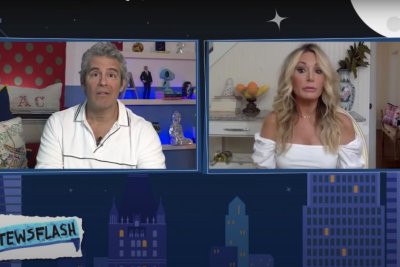