Nov. 17 (UPI) -- Author Stephen King and filmmaker Rob Reiner were among the luminaries to pay homage to screenwriter William Goldman, who died Friday at the age of 87.

"So sorry to hear of the passing of William Goldman. He was both witty and talented. His screenplay of my book MISERY was a beautiful thing. Rest In Peace, Bill," King tweeted.

"Losing Bill Goldman made me cry. My favorite book of all time is The Princess Bride. I was honored he allowed me to make it into a movie. I visited with him last Saturday. He was very weak but his mind still had the Goldman edge. I told him I loved him. He smiled & said (expletive) you," Reiner wrote in his own post.

Goldman wrote the screenplay for one of Reiner's biggest hits, The Princess Bride, which was based on Goldman's fantasy novel of the same name. Reiner also directed Misery.

Goldman won two Oscars for his screenplays for All the President's Men and Butch Cassidy and the Sundance Kid, both of which starred Robert Redford.

"We had a long earlier history and I'm sorry to hear of his passing," the actor told TheWrap.

So sorry to hear of the passing of William Goldman. He was both witty and talented. His screenplay of my book MISERY was a beautiful thing. Rest In Peace, Bill.

Chef and television personality Anthony Bourdain attends the Creative Arts Emmy Awards in Los Angeles on August 16, 2014. Bourdain died by suicide in France at the age of 61, his employer CNN announced on June 8. File Photo by Jim Ruymen/UPI | License Photo 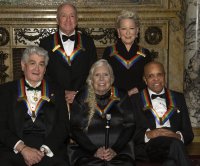