The pregnant 37-year-old actress showed off her growing belly during an outing with friends Thursday following news she's expecting with husband Chris Fischer.

Schumer shared a photo on Instagram of herself flashing a section of bare belly. The mom-to-be was enjoying a walk with her sister, Kim Caramele, and a friend.

The I Feel Pretty star captioned the post with a family-of-three emoji. Fans congratulated Schumer on her pregnancy in the comments.

"Congrats Amy, being a mom is AMAZING! Life just gets better!" one person wrote.

"Congrats to you and family!!! Babies are the biggest blessing ever," another added.

Schumer announced her pregnancy with the help of friend and former CNN correspondent Jessica Yellin in October. She and Fischer married in a surprise ceremony in February after a few months of dating.

"Part of the thing that's good about us getting married so quickly is that we're so in love," the star said on the You Up? with Nikki Glaser podcast the same month.

"I'm a wife as hell. But it's still, like, a novelty," she added of calling Fischer her spouse. "I just have been really overusing it to a degree that's insane. Like, when it's completely uncalled for." 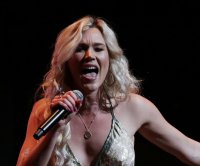