July 23 (UPI) -- Chloe Bennet and Logan Paul made their red carpet debut as a couple after confirming their relationship this month.

Bennet was all smiles in a one-shoulder, ruffled pink minidress at the event. She and Paul stayed close as they posed for photos.

Bennet and Paul had confirmed dating rumors in separate Instagram posts this month. Paul credited the Agents of S.H.I.E.L.D. star with risking "her career and personal friendships" to help him "grow as a human being."

"i never thought it was possible but this girl has won my heart. one of the MANY reasons i love Chloe: over the past year she's experienced ALL my ups & all my downs. and as most of you know... mainly downs. BUT. she never turned her back on me," Paul wrote July 17.

"To anyone giving her a hard time, please do not hold Chloe accountable for MY actions in the past; instead recognize her efforts to help me become a better man & do good on this floating rock. That's a queen right there. My queen," he gushed.

YouTube temporarily demonetized Paul's channel in February after the star sparked outrage by shooting a taser at a dead rat in one of his videos. He previously drew criticism after posting a video in December of an apparent suicide victim in Aokigahara forest. 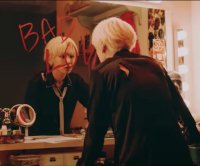