Prince William (L) and Kate Middleton with their son Prince Louis. The infant was christened on Monday at The Chapel Royal, St. James's Palace. Photo by Will Oliver/EPA

July 9 (UPI) -- Britain's Prince Louis was "very relaxed and peaceful" during his christening Monday, his mother Kate Middleton said after the ceremony at St James' Palace in London.

The 11-week-old prince slept through the ceremony in the duchess of Cambridge's arms as she stood alongside her husband, Prince William, who held the hands of Prince George and Princess Charlotte during the 40-minute ceremony.

"I hope he stays like this," Middleton told the archbishop of Canterbury, the Rev. Justin Welby, who baptized Prince Louis in the Chapel Royal at St James' Palace.

The ceremony marked the first time Prince Louis has appeared in public with both of his parents and two siblings.

Queen Elizabeth II and Prince Philip did not attend, stating that the decision was made some time ago and is not related to any health issues.

William and Middleton once again chose not to name any of their siblings as godparents. The couple have chosen close friends and other family members such as Princess Diana's niece, Laura Fellowes, to be godparents for their children.

Louis was born on April 23 at the Lindo Wing of St. Mary's hospital in West London. The baby, who is fifth in line to the throne, entered the world weighing 8 pounds, 7 ounces.

Members of the Royal Family arrive at St James's Palace for the christening of Prince Louis. pic.twitter.com/3pDk4D898C 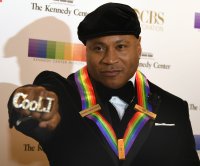