The 42-year-old country star gushed about his relationship with the 48-year-old singer in a preview for the June 24 episode of Sunday Today with Willie Geist.

"Now here we are, going on three years later and every day that goes by, it just feels like a stronger bond between the two of us," Shelton told host Willie Geist.

"It constantly feels like it's going to the next level. That's the only way I think either one of us could probably describe it," he added.

Shelton and Stefani confirmed their relationship in November 2015 following their splits from their respective spouses, Miranda Lambert and Gavin Rossdale. The couple found support and comfort in each other after their divorces.

"When I was going through my divorce, I hit rock bottom just like anybody does when they go through something that devastating," Shelton said. "It's a miracle that I met somebody that was going through the same exact thing that I was at the exact same moment in time."

"I think if Gwen and I were being honest right now, talking about this, I think in the back of our minds we both kind of thought, 'This is a rebound deal,' because we're both coming out of a pretty low spot in our lives and we're kind of clinging to each other to get through this," he added.

Stefani thanked Shelton for sharing his world with her after spending Tuesday at Lake Texoma with the country singer and her son Apollo. She sent love to Shelton the day previous on his 42nd birthday.

NBC sets fall premiere dates for 'The Voice,' 'This is Us' and more Gwen Stefani, Blake Shelton enjoy day on lake with her son Mike 'The Situation' Sorrentino proposes on 'Jersey Shore: Family Vacation' Joe Giudice says he's not being deported to Italy

Entertainment News // 1 hour ago
WWE WrestleMania 37: Roman Reigns conquers Edge, Daniel Bryan
April 12 (UPI) -- WrestleMania 37, WWE's biggest event of the year, concluded Sunday night at Raymond James Stadium in Tampa, where live fans were viewing the action for the first time in over a year due to the COVID-19 pandemic. 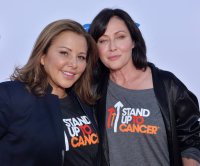