"He said, 'If you ever make her fell uncomfortable again, I'll kill you,'" the actress recounted.

May 24 (UPI) -- Gwyneth Paltrow says Brad Pitt used his "fame and power" to protect her following an encounter with Harvey Weinstein in the 1990s.

The 45-year-old actress recalled on Wednesday's episode of The Howard Stern Show how Pitt confronted Weinstein after the producer sexually harassed her in a hotel room. Paltrow and Pitt were dating at the time.

"I told him right away and I was very shaken by the whole thing," Paltrow told host Howard Stern. "We were at the opening of Hamlet on Broadway. Harvey was there and Brad Pitt -- it was like the equivalent of throwing him against the wall, energetically."

"It was so fantastic. He leveraged his fame and power to protect me at a time when I didn't have fame or power yet," she said. "He said, 'If you ever make her feel uncomfortable again, I'll kill you.' Or something like that."

Paltrow told The New York Times in October that she met with Weinstein at his hotel room after landing the lead in Emma at age 22. She said the producer placed his hands on her and suggested they move to the bedroom for massages.

"I was a kid, I was signed up, I was petrified," the actress recalled.

Pitt confronted Weinstein after Paltrow told him about the encounter, but the producer warned Paltrow not to tell anyone else about the incident.

"I thought he was going to fire me," she recalled.

Weinstein was fired from his company The Weinstein Co. in October after multiple women, including Paltrow, Angelina Jolie and Ashley Judd, accused him of sexual harassment and abuse.

TV // 10 hours ago
Kristen Wiig, Willem Dafoe interrupt Will Forte's first 'SNL' guest host monologue
Jan. 23 (UPI) -- Will Forte joked that "Saturday Night Live" was just saving the best for last by waiting to invite him to guest host for the first time, 12 years after he left as a cast member.

Movies // 13 hours ago
Karen Gillan: Sundance clone movie 'Dual' was 'like being on Avengers'
LOS ANGELES Jan. 23 (UPI) -- Karen Gillan, co-stars Aaron Paul and Beulah Koale and writer/director Riley Stearns discuss their Sundance movie "Dual." Gillan plays a woman and her clone in a process she compared favorably to her Marvel movies. 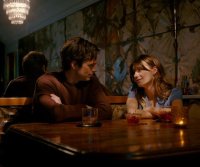