Tristan Thompson and the Cleveland Cavaliers warm up prior to playing the Chicago Bulls on December 21, 2017. File Photo by Aaron Josefczyk/UPI | License Photo

April 11 (UPI) -- Amber Rose is showing her support for Khloe Kardashian amid reports the star's boyfriend, Tristan Thompson, was unfaithful.

The 34-year-old television personality said in a since-deleted post Tuesday on Instagram Stories that her "heart is broken" for Kardashian. Rose's rep confirmed to Entertainment Tonight that Rose was writing about the 33-year-old reality star.

"I know we've had our differences in the past but my heart is broken for you sis," Rose, who previously clashed with Kardashian and her sisters, wrote.

"smh no one deserves to feel that pain especially during such a sensitive time," she added, appearing to reference Kardashian's pregnancy. "God bless you and your baby." 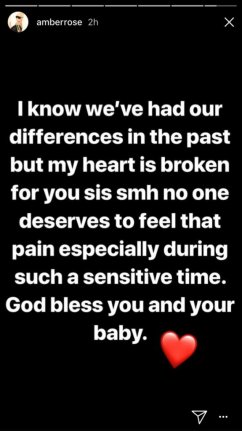 TMZ published a video Tuesday of Thompson appearing to kiss and touch two women at a hookah lounge outside Washington, D.C., in October. TMZ also shared a video of Thompson arriving at his hotel with a woman Sunday in New York.

Thompson's ex-girlfriend, Jordan Craig, appeared to also address the reports on Instagram Stories. Thompson was first linked to Kardashian in September 2016, prior to Craig giving birth to her son with the Cleveland Cavaliers player.

"If you respect yourself and you respect others, you would never make light of the misfortune of anyone, nor would you feel indemnified when it comes at the expense of others. Wishing peace for everyone," Craig wrote.

Kardashian is pregnant with her first child with Thompson, and is expected to give birth any day now. She has yet to address the cheating reports.