What we know about Prince Harry, Meghan Markle's wedding 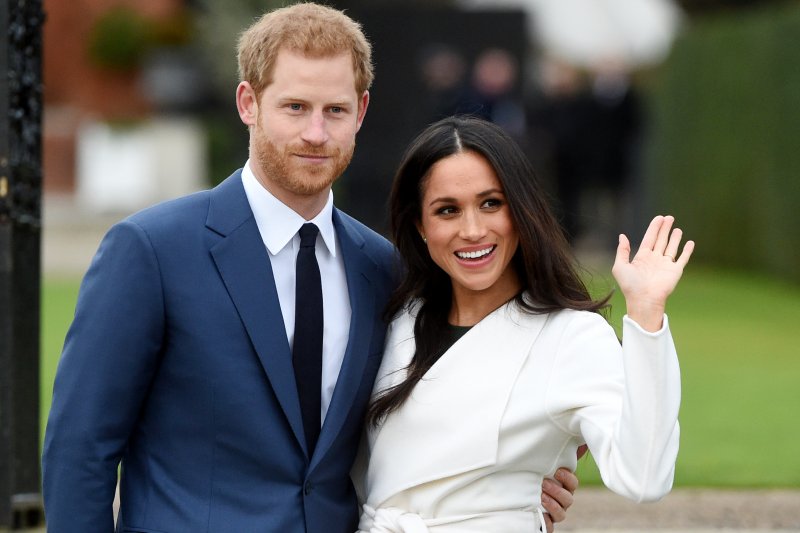 Prince Harry (L) and Meghan Markle will tie the knot May 19 at St. George's Chapel. File Photo by Facundo Arrizabalaga/EPA-EFE

May 18 (UPI) -- Prince Harry and Meghan Markle will tie the knot at a highly anticipated wedding in May.

People around the globe are looking forward to the 33-year-old British royal and 36-year-old American actress saying their "I dos" next month. Here's what we know so far:

Engagement
Harry and Markle got engaged in November after more than a year of dating. The prince proposed as they were cooking dinner during a quiet night at home.

"It was just an amazing surprise," Markle told the BBC. 'It was so sweet and natural and very romantic. He got on one knee. As a matter of fact, I would barely let him finish proposing. I was like, 'Can I say yes now?'"

Wedding ceremony
Kensington Palace announced in December that Harry and Markle will marry May 19 at St. George's Chapel at Windsor Castle in England. The prince's father, Prince Charles, and Camilla Parker Bowles received a blessing at the same chapel following a civil ceremony in 2005.

Harry and Markle's wedding ceremony will begin at noon GMT, or 7 a.m. EST. David Conner, the dean of Windsor, will conduct the service, with Justin Welby, the archbishop of Canterbury, to officiate.

"They hope this short journey will provide an opportunity for more people to come together around Windsor and to enjoy the atmosphere of this special day," Kensington Palace said in February.

Harry and Markle have selected an Ascot Landau carriage from the Royal Mews for the journey. The carriage will be drawn by a team of Windsor Grey horses, including father-and-son duo Storm and Tyrone.

"It's a wonderfully bright, small, lovely carriage, very easy for people to see -- the passengers can sit up quite high. So there's lots of visibility for everybody," the Crown Equerry, Col. Toby Browne, said of the carriage in May.

Wedding reception
Harry and Markle will celebrate with their guests at a reception at St. George's Hall at Windsor Castle. Charles will host a private reception for the couple and their close friends and family at Frogmore House later in the evening.

"They are looking forward to the day and to being able to share their celebrations with the public," Kensington Palace said.

Invitations and guests
Harry and Markle sent their wedding invitations in March. Printing and bookbinding company Banard & Westwood used English card stock and American ink for the invitations, which feature black ink, a gilded edge and the Three-Feathered Badge of the Prince of Wales in gold.

Kensington Palace said Harry and Markle have invited 2,600 members of the public to participate in the ceremony. These guests will be able to view the couple's arrival at St. George's Chapel and the subsequent carriage procession.

"Around 200 guests" will attend the private reception at Frogmore House. Charles and other members of Harry's family, including his grandmother Queen Elizabeth II and brother Prince William, are expected to attend the more intimate event.

The Guardian reported in April that Harry and Markle have not invited any politicians to their wedding. Kensington Palace shared a partial guest list April 10, saying the couple singled out "young people who have shown strong leadership, and those who have served their communities" in Great Britain.

Family celebration
Harry's brother, Prince William, the Duke of Cambridge, will serve as best man at the wedding. Harry served as best man during William's marriage to Kate Middleton in April 2011.

"The Duke of Cambridge is honoured to have been asked, and is very much looking forward to supporting his brother," Kensington Palace tweeted in April.

Also in attendance will be Markle's mother Doria Ragland. Her father, Thomas Markle, will not be at the wedding due to health issues.

"Sadly, my father will not be attending our wedding. I have always cared for my father and hope he can be given the space he needs to focus on his health," Meghan said in a statement.

Markle asked her future father-in-law Charles to walk her down the aisle for the royal wedding in place of her father.

Her mother Doria will travel with Markle by car to Windsor Castle the day of the wedding.

Harry will honor his late mom, Princess Diana, by including her three siblings, Charles Spencer, Jane Fellowes and Sarah McCorquodale, in the wedding. Lady Jane will give a reading at the ceremony.

Diana died in a car crash at age 36 in August 1997. Harry said in an interview with the BBC following his engagement to Markle that he believes his mom would have been "thick as thieves" with the actress.

"I think she would be over the moon, jumping up and down, you know so excited for me, but then, as I said, would have probably been best friends -- best friends with Meghan," he said.

Harry and Markle's chose six bridesmaids and four page boys. Harry's nephew and niece, Prince George, 4, and Princess Charlotte, 2 -- the children of William and Kate Middleton -- were among those selected. The bridal party also includes two of Harry's goddaughters, Florence van Cutsem, 3, and Zalie Warren, 2, along with two of Markle's goddaughters, Rylan Litt, 7, and Remi Litt, 6.

Harry's godson Jasper Dyer, 6, and the three children of Markle's friend, Canadian stylist Jessica Mulroney -- Ivy, 4, and twins Brian and John, 7 -- round out the rest of the bridal party.

Gifts
Harry and Markle have asked well-wishers to donate to charity instead of sending wedding gifts.

"Prince Harry & Ms. Meghan Markle are incredible grateful for the goodwill they have received since their engagement, & have asked that anyone who might wish to mark the occasion of their wedding considers giving to charity, instead of sending a gift," Kensington Palace tweeted in April.

"The couple have [chosen] @CorporalScotty, a charity that offers vital support and activities to children who have lost a parent while serving in the British Armed Forces, helping them to smile again," Kensington Palace said.

Harry served in the British Army for 10 years. He supports a number of organizations for service members and veterans, including the Invictus Games, which he founded in 2014. The prince and Markle attended the Invictus Games U.K. trials together in April.

British floral designer Philippa Craddock will create the floral arrangements for the wedding ceremony. Kensington Palace said much of the foliage will be taken from the gardens of the Crown Estate and Windsor Great Park.

"Where possible, Philippa will use flowers and plants that are in season and blooming naturally in May, including branches of beech, birch and hornbeam, as well as white garden roses, peonies and foxgloves," the palace said.

Royal future
Harry and Markle will likely take the titles of duke and duchess of Sussex on their wedding day. Elizabeth will choose the title.

Kensington Palace confirmed in November that Markle intends to become a British citizen after the wedding. The actress will retain her U.S. citizenship as she applies to become a citizen of the U.K., a process that is expected to take several years.

Markle is known for playing Rachel Zane on the USA Network series Suits, but will leave the show after Season 7. She has deleted her lifestyle blog, The Tig, and her social media accounts.

Music // 1 hour ago
Pentagon pose, play pool in 'Feelin' Like' music video teaser
Jan. 19 (UPI) -- K-pop group Pentagon shared a preview of its video for "Feelin' Like," the title track from its EP "In:vite U."

Entertainment News // 1 hour ago
Cardi B to cover funeral costs for victims of Bronx fire
Jan. 19 (UPI) -- Cardi B has announced plans to pay the funeral and burial costs of those who died in a recent apartment building fire in the Bronx borough of New York City.