Chrissy Teigen says her baby boy is due in June

The 32-year-old model and television personality said on Monday's episode of The Ellen DeGeneres Show that her second child with husband John Legend will arrive in June.

"I'm having a baby boy in the spring. I'll tell you -- it's June!" she told host Ellen DeGeneres.

Teigen and Legend already share 22-month-old daughter Luna Simone. The couple have yet to pick a name for their unborn son.

"Boy names are really tough," Teigen explained before quipping, "I don't even think he'll have a middle name because we can't even think of a first name."

"[With Luna], there was a blood moon happening," she said. "It was a very beautiful night. Really big, vivid, red moon, and just gorgeous. I have this love for space, and I think about space camp all the time and my days at space camp as a youngster. I just thought Luna was perfect."

Teigen and Legend announced the model's pregnancy in November. Teigen discussed her family on The Tonight Show starring Jimmy Fallon in January, saying she was five months along in her pregnancy.

"[Luna will] be two in April and she's just so much fun," she added. "She's so funny. She's talking up a storm. Loves dad. You know girls and their dads -- they're so close." 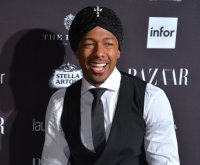 TV // 8 hours ago
'Rebelde' trailer introduces cast of Netflix reboot
Dec. 7 (UPI) -- "Rebelde," a new series based on the Mexican telenovela, will premiere on Netflix in January 2022.