John Cena has been announced as the host of the 2018 Nickelodeon Kids' Choice Awards. File Photo by James Atoa/UPI | License Photo

Jan. 12 (UPI) -- WWE Superstar John Cena is set to host the Nickelodeon Kids' Choice Awards for the second year in a row.

The event awards and features kids favorites from across the worlds of film, television, music, pop culture, animation and more.

Cena has also partnered with Nickelodeon to voice an original villain named Baron Draxum in the network's upcoming Rise of the Teenage Mutant Ninja Turtles animated series and to executive produce a new competition series titled Keep It Spotless, where teams of kids will compete in a battle to stay clean.

"John Cena is one of the biggest stars in the world. Kids just love him, which makes him the perfect partner for these upcoming projects," president, Nickelodeon group Cyma Zarghami said in a statement. "His blend of humor and originality brings a fresh voice to Nickelodeon both in front of the camera and behind."

"I'm thrilled to partner with Nickelodeon on three big projects that run the range of what kids love-slime-filled live events, awesomely cool animation and competition shows where kids take their shot at being the best," Cena said.

"It's an honor to come back a second time to host the biggest, slimiest party of the year, the Kids' Choice Awards. Not only do I get to be a cartoon character in the new Rise of the Teenage Mutant Ninja Turtles series, but I get to be a villain, too. And to top it all off, I'm stepping behind the camera to executive produce Nick's new competition series Keep It Spotless, which gives a whole new meaning to staying clean," he continued.

Cena's busy schedule outside of WWE has kept the 16-time World Champion wrestling on a part-time basis. He was last seen battling Elias on Raw in December and will be competing at the Royal Rumble on Jan. 28.

"I love my WWE family and the time in the ring but a lot of these projects are taking away from the full-time commitment of the WWE schedule," Cena said while speaking with The Wrap. "So I've had to have a long talk with myself and say, 'hey, you're not exactly going to be out there 360 days a year if you want to do all this new stuff."

TV // 48 minutes ago
'The Wheel of Time' trailer shows Rosamund Pike wield magic as Moiraine
Oct. 28 (UPI) -- "The Wheel of Time," a new series based on the Robert Jordan fantasy book series, is coming to Amazon Prime Video in November.

TV // 1 hour ago
Dan Levy says 'Ew, David' catchphrase will 'haunt' him for the rest of his life
Oct. 28 (UPI) -- Dan Levy discussed the "Ew, David" catchphrase from "Schitt's Creek" and his latest book on the series while appearing on "Jimmy Kimmel Live." 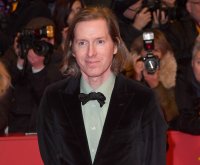