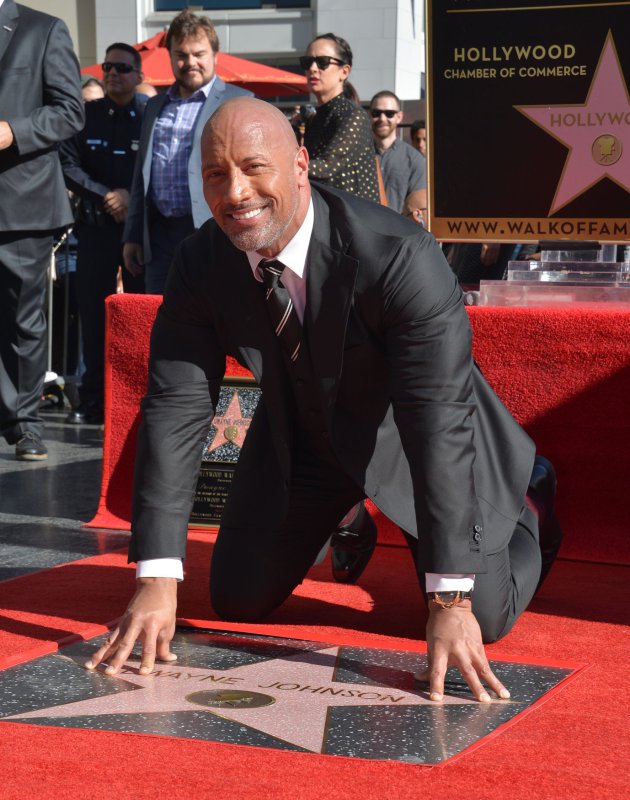 Dwayne Johnson has been honored with the 2,624th star on the Hollywood Walk of Fame in Los Angeles. File Photo by Jim Ruymen/UPI | License Photo

Dec. 14 (UPI) -- Dwayne Johnson received a star on the Hollywood Walk of Fame Wednesday during a ceremony that was attended by family and celebrity friends.

Hashian was noticeably displaying a baby bump at the event days after the couple announced on social media that they are expecting their second child together, a girl.

The event took place in Los Angeles at the Hollywood & Highland complex just one week before his latest film, Jumanji: Welcome to the Jungle, hits theaters.

"At the end of the day, all of this goes away if it weren't for you," Johnson said onstage in reference to his fans in attendance.

RELATED Dwayne Johnson gets star on Hollywood Walk of Fame

Johnson's other 2017 film credits include The Fate of the Furious, Baywatch and a starring role on his HBO comedy series Ballers. Upcoming projects include Rampage, Jungle Cruise based on Disney's classic theme park ride and a film based around DC comics character Black Adam.

The 45-year-old first rose to fame as The Rock, a professional wrestler inside the WWE where he quickly became one of the biggest figures the company has ever seen. The Rock headlined multiple WrestleManias, feuded with other top stars such as Stone Cold Steve Austin and Triple H and became an eight-time World Champion.

Johnson, who first got his start in Hollywood with 2001's The Mummy Returns, now runs his own studio, Seven Bucks Productions, alongside his longtime manager and ex-wife, Dany Garcia.

"The ambition to grow developed the moment I stepped foot in Hollywood," Johnson said while speaking to Variety about moving from WWE to acting. "I knew then I didn't have any experience as an actor. I cut my teeth and made my bones in the crazy world of professional wrestling, which built a live-crowd acumen for me, but that doesn't necessarily translate onto film. I knew I needed to understand the business from top to bottom, 360 degrees, and be a total sponge."

TV // 6 hours ago
Anne Rice's 'The Mayfair Witches' coming to AMC in 2022
Dec. 1 (UPI) -- AMC announced Wednesday that it has greenlit a series based on Anne Rice's "The Mayfair Witches." This is the second series in AMC's Rice universe after their "Interview with the Vampire" adaptation.