Ed Westwick and Jeremy Piven have taken to Twitter to deny the recent sexual abuse allegations levied against them. File Photo by Jim Ruymen/UPI | License Photo

Nov. 10 (UPI) -- Ed Westwick and Jeremy Piven both denied on Twitter Thursday that they raped or sexually assaulted a number of women who have come forward with allegations.

"It is disheartening and sad to me that as a result of two unverified and provably untrue social media claims, there are some in this environment who could ever conclude I have had anything to do with such vile and horrific conduct," Westwick wrote after being accused by a second actress of rape Wednesday.

"I have absolutely not, and I am cooperating with the authorities so that they can clear my name as soon as possible," the Gossip Girl alum continued.

Westwick is facing rape allegations from actress Kristina Cohen who filed a police report Tuesday at the LAPD's Hollywood Division and Aurelie Wynnn, who went by the name Auralie Marie Cao during her acting career. Both women shared their stories on Facebook and say Westwick forced himself on them in 2014.

"Let me begin by saying that the accusations against me are absolutely false and completely fabricated, Piven wrote as part of a lengthy statement where he discusses taking a polygraph test to prove his innocence.

"We seem to be entering dark times -- allegations are being printed as facts and lives are being put in jeopardy without a hearing, due process or evidence. I hope we can give people the benefit of a doubt before we rush to judgment," he continued.

"Continuing to tear each other down and destroy careers based on mere allegations is not productive on any level. I hope we can use this moment to begin constructive dialogue on these issues, which are real and need to be addressed," Piven concluded. 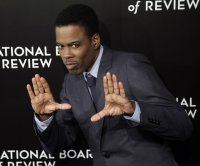 Movies // 11 hours ago
'Shang-Chi' tops North American box office for a 3rd weekend
Sept. 19 (UPI) -- "Shang-Chi and the Legend of the Ten Rings," is the No. 1 movie in North America for a third weekend, earning an additional $6.1 million in receipts, BoxOfficeMojo.com announced Sunday.

Entertainment News // 18 hours ago
Kaya Scodelario and Benjamin Walker expecting second child
Sept. 19 (UPI) -- The Maze Runner and Pirates of the Caribbean: Dead Men Tell No Tales actress Kaya Scodelario has announce on Instagram she is pregnant with her second child.