The ACLU has responded to a letter from a lawyer who says he represents Taylor Swift, pictured here, who wants an article taken down. File Photo by Phil McCarten/UPI | License Photo

Nov. 7 (UPI) -- The American Civil Liberties Union has commented on the demands of Taylor Swift's lawyer who wants a negative article about the singer taken down.

The article titled "Swiftly to the alt-right: Taylor subtly gets the lower case kkk in formation," was posted onto blog PopFront and discusses the appropriation of Swift by white nationalists and how the pop star's silence regarding politics "could be construed as her lending support to the voices rising against embracing diversity and inclusion emblematic of Trump supporters."

Attorney William J. Briggs II, who said he represents Swift, sent a letter in October to PopFront executive editor Meghan Herning asking for the piece to be retracted under the threat of a lawsuit.

"The story is replete with demonstrable and offensive falsehoods which bear no relation to reality or the truth about Ms. Swift. It appears to be a malicious attack against Ms. Swift that goes to great lengths to portray Ms. Swift as some sort of white supremacist figurehead, which is a baseless fiction masquerading as fact and completely misrepresents Ms. Swift. As further shown below, PopFront is substantially liable to Ms. Swift for defamation," Briggs writes in the letter shared by the ACLU.

Briggs and a representative of Swift's did not respond to requests from NPR to confirm the letter and Briggs' authenticity.

The ACLU of Northern California in response noted that PopFront will not adhere to the letter's demands and that the blog has protections against a defamation lawsuit due to Swift being a public figure.

"Criticism is never pleasant, but a celebrity has to shake it off, even if the critique may damage her reputation," the ACLU wrote in response while referencing Swift's 2014 single "Shake It Off" and her upcoming sixth studio album Reputation.

Reputation will be released on Nov. 10 and will include the songs "Look What You Made Me Do," "...Ready For It?" "Gorgeous" and "Call It What You Want." 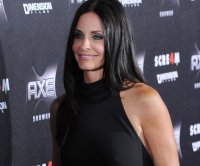