The "Heroes" co-stars split in 2009 after two years of dating.

Sept. 15 (UPI) -- Milo Ventimiglia says he avoids dating in the public eye at all costs.

The 40-year-old actor explained in an interview with Mr. Porter's Journal that the frenzy over his romance with Hayden Panettiere taught him to keep his relationships private.

"[I'll] never do it again," Ventimiglia said. "There are things that happen to you in your life that shape who you are. Everything I've been through from jobs to friendships to partnerships, everything has built me to who I am. You learn from it. You learn a better way of doing things."

"It wasn't until my mid to late twenties that the job wears on you, relationships wear on you," he added. "But I wouldn't change a thing. When you get knocked over the head in life, it builds your perspective."

Ventimiglia and Panettiere, who co-starred on Heroes, were 29 and 18 years old, respectively, when they started dating. Much was made of the relationship until the pair split in 2009 after two years together.

"It was never a case of me making a decision, saying, 'I want to date older men,'" Panettiere told The Telegraph in 2015. The actress got engaged to boxer Wladimir Klitschko, who is 13 years her senior, in 2013.

"I am drawn to people who make me up my game, who bring me up to their level," she explained. "I want to be with somebody who is more worldly than me, somebody who can give me guidance and is completely secure and comfortable with who they are."

Ventimiglia plays Jack Pearson on the NBC series This is Us, which will return for a second season Sept. 26. The show co-stars Mandy Moore, Sterling K. Brown, Chrissy Metz and Justin Hartley.

Harrison Ford reacts to Carrie Fisher detailing affair: 'It was strange' Ariel Winter says her mom sexualized her at a young age Heather Locklear hospitalized after car crash in California Chip and Joanna Gaines laugh off divorce rumors: 'They're hilarious' 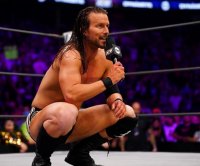 TV // 7 hours ago
Adam Cole talks 'Grand Slam,' joining AEW: 'Could not be happier'
Sept. 22 (UPI) -- Professional wrestler Adam Cole, the top performer from WWE's "NXT" brand, has taken his talents to AEW and is competing at the promotion's biggest event ever in "Grand Slam," a two-night extravaganza in New York City.