The tennis star is expecting her first child with fiancé Alexis Ohanian. 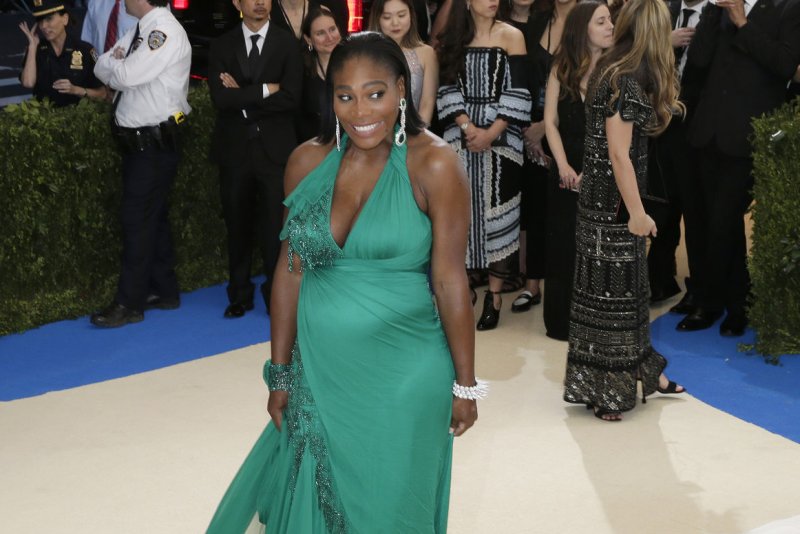 Serena Williams attends the Costume Institute Benefit at the Metropolitan Museum of Art on May 1. The tennis star shared a new picture of her growing belly Tuesday. File Photo by John Angelillo/UPI | License Photo

The pregnant 35-year-old tennis star shared a new picture and a funny Snapchat video Tuesday ahead of the birth of her first child with her fiancé, Reddit founder Alexis Ohanian.

Williams showed off her growing belly in a snapshot of herself sitting in profile. She followed up with a clip of herself pointing out where the baby is positioned in her belly, explaining, "How athletes look at pregnancy."

"So, baby's head is here," the star said as she drew a circle on her lower abdomen with a marker. "Good job, you want it to stay there."

"Spine, somewhere in this region," she continued. "You have the feet maybe over here or a little bit over here. Hands, I feel it punching, are over here."

Serena Williams posted a clip of herself pointing out where the baby is positioned in her belly. Screenshot via Serena Williams/Snapchat

Williams announced her pregnancy in April after getting engaged to Ohanian in December. She said in an interview with The Telegraph published Monday that she's already anticipating her return to tennis.

"I am looking forward to becoming a mother and coming back to the courts already," the star said. "I'm always thinking about what's next: the next victory, the next trophy."

"I intend to keep exercising for as long as possible while pregnant," she added. "I want the baby to be healthy for for that you need a healthy life. Also, when I come back to tennis it'll be better if I've kept as fit as possible all the way through the pregnancy."

Williams was fêted at a 1950s-themed baby shower this month. Her sister, tennis pro Venus Williams, actress Eva Longoria, and singers Ciara and Kelly Rowland were among the guests in attendance.