The aspiring actress is also sister to Prince Jackson.

Paris Jackson attends the Costume Institute Benefit at the Metropolitan Museum of Art on May 1. The actress shared a picture with brother Blanket on Tuesday. File Photo by John Angelillo/UPI | License Photo

The 19-year-old actress shared a picture Tuesday on Instagram Stories with 15-year-old Blanket during an outing with friends.

The since-deleted picture shows Paris, Blanket and their friends smiling as they pose near their table in a restaurant. Paris last posted with Blanket in February to celebrate his 15th birthday.

"ughhhhhh my little man is 15 today," the star wrote at the time. "I want you to stay a baby forever."

"this lil dude right here is one of the most strong, intelligent, and determined people i know. watching you grow up and slowly becoming a man is like super terrifying but i honestly can't tell you how proud i am. i love you so much B," she added.

Paris is the only daughter of late singer Michael Jackson, who died at age 50 in 2009. She is also sister to 20-year-old Prince Jackson, and discussed her sheltered upbringing with her brothers in the April issue of Harper's Bazaar.

"When I was a kid, I was with my dad and my two brothers," the actress told the magazine. "Growing up, I was treated as the favorite because I was the only girl. I was the princess; I was perfect in my dad's eyes."

"The first 12 years of my life I was homeschooled. Which means that the only interactions I'd ever had were with family members or other adults," she said. 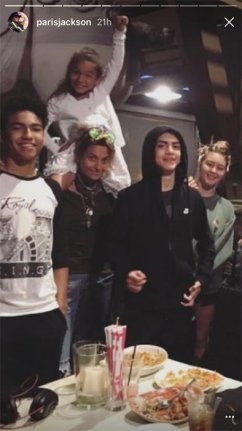 Paris Jackson shared a picture with brother Blanket Jackson during an outing with friends this week. Photo by Paris Jackson/Instagram

Paris made her acting debut in March on the Fox series Star, and will appear in a new Amazon Studios movie with David Oyelowo.

Paris Jackson says in Instagram post: 'I'm usually naked when I garden' Japan's Princess Mako to give up royal status for marriage Keiynan Lonsdale of 'The Flash' comes out as bisexual Normani Kordei agrees to date with Bonner Bolton

Entertainment News // 3 hours ago
Emmy Awards: How to watch, what to expect
Sept. 17 (UPI) -- The 73rd annual Emmy Awards will air live Sunday from the Microsoft Theater in Los Angeles.

Entertainment News // 5 hours ago
What to stream this weekend: 'The Morning Show' S2, Emmys
Sept. 17 (UPI) -- "The Morning Show" Season 2, the 73rd annual Emmy Awards, "Sex Education" Season 3, "Lady of the Manor," "Uprising" and "Everybody's Talking About Jamie" are some of the entertainment options streaming this weekend.

TV // 6 hours ago
'You' Season 3 trailer shows Joe, Love move to suburbs with son
Sept. 17 (UPI) -- "You," a psychological thriller series starring Penn Badgley and Victoria Pedretti, will return for a third season on Netflix in October.
Advertisement