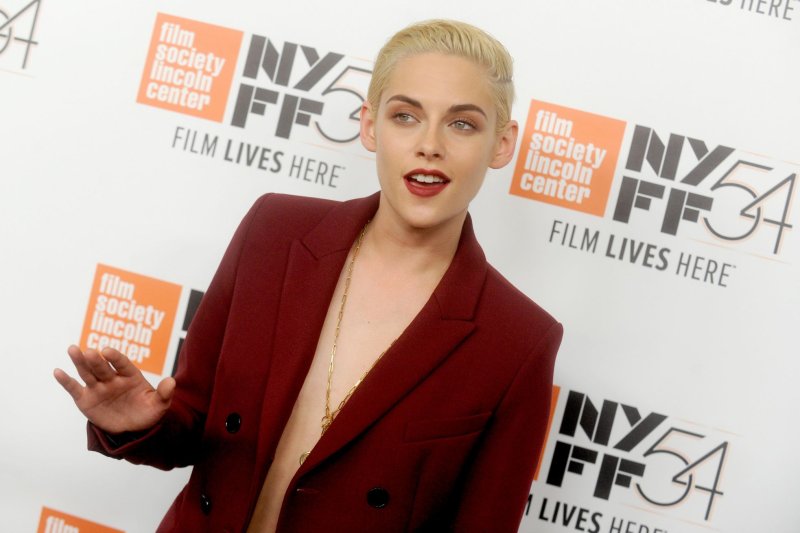 Kristen Stewart arrives on the red carpet at The National Board of Review Gala honoring the 2015 award winners in 2016. File Photo by John Angelillo/UPI | License Photo

March 8 (UPI) -- Kristen Stewart debuted a new platinum blonde buzzcut on the red carpet for the premiere of her new film, Personal Shopper.

The actress posed for photos Tuesday wearing an all-black ensemble that included a sheer corset and wide black pants with charcoal-lined eyes.

Stewart chopped off her hair to prepare for an upcoming role in disaster movie Underwater, Us Weekly reported. The film is set to follow an underwater research crew who survives an earthquake.

Stewart's hairstylist Bridget Brager shared a photo on Instagram of the new look writing, "We tried something a little different today."

In January 2014, Stewart explained during an interview with Into the Gloss how she's always wanted to shave her head.

"I'm definitely going to shave my head before I die," the 26-year-old said at the time. "I will definitely tattoo my head while it's shaved before my hair grows back. I'm not sure which part, probably the bottom quadrant in the back. I don't know what the tattoo would be yet. Still thinking."

While promoting Personal Shopper, Stewart spoke to E! News regarding her opening monologue on Saturday Night Live from February in which she referred to herself as being "like, so gay."

"Honestly, I think it was just funny," she said. "Not to diminish the point because I think that saying things so bluntly is absolutely important, but at the same time, the only reason I haven't ever done that is because there is an ambiguity to that and I wanted things to be really real for me."

"It wasn't like, 'Let's do this thing that's going to be so important.' I just thought it was like a nice, light... and also yeah, I'm so utterly proud that I've had so many people be like, 'Thank you,' and I'm like, 'No, thank you.' It's kind of mutual, full circle," she said.

Music // 1 hour ago
Seventeen shares 'Ready to Love' music video teaser
June 15 (UPI) -- K-pop group Seventeen released a preview of its video for "Ready to Love," the title track from its EP "Your Choice."

Entertainment News // 7 hours ago
Nintendo announces 2D 'Metroid,' showcases 'Breath of the Wild 2' at E3
June 15 (UPI) -- Nintendo held its annual E3 Direct presentation on Tuesday where it announced a new 2D "Metroid" game and provided a new trailer for "The Legend of Zelda: Breath of the Wild 2."