Ashley Graham celebrates her cellulite: 'I love the skin I'm in'

"I'm not ashamed of a few lumps, bumps or cellulite," the model said.

Ashley Graham at the Sports Illustrated Sportsperson of the Year ceremony for LeBron James on December 12, 2016. File Photo by John Angelillo/UPI | License Photo

Ashley Graham at the Glamour Women of the Year Awards on November 14, 2016. File Photo by Jim Ruymen/UPI | License Photo

The 28-year-old model shared a photo of her cellulite and a body-positive message Wednesday on Instagram from her trip to Manila, Philippines.

"I workout. I do my best to eat well. I love the skin I'm in. And I'm not ashamed of a few lumps, bumps or cellulite.. and you shouldn't be either. #beautybeyondsize #lovetheskinyourein," she captioned the picture for her 3 million followers.

Graham is in the Philippines to serve as the backstage host for the Miss Universe pageant Sunday, according to People. Fans praised the star for her "beautiful" and "inspiring" post in the comments.

"At last a beautiful 'real' person. I applaud you for being bold and unapologetic," one person wrote.

"YASSS girl!! that only shows that you're real!! people need to know that ANY woman can have this... and it's not bad. it's not ugly. it's just normal!" another added.

I workout. I do my best to eat well. I love the skin I'm in. And I'm not ashamed of a few lumps, bumps or cellulite.. and you shouldn't be either. #beautybeyondsize #lovetheskinyourein

Graham is known for her modeling work with Lane Bryant, and became the first plus-size model to appear on the cover of the Sports Illustrated swimsuit issue in 2016. She recently landed her first-ever Vogue cover, appearing on the Jan. cover of British Vogue.

"The most rewarding part about the honor of being British Vogue's January cover girl is knowing how many lives we are changing," the star said in an essay for the magazine. "[I've been] hearing from thousands of women that they don't feel invisible anymore."

"This is a triumph for us all, and a beautiful demonstration of how we used our voices to create change, because loving ourselves at every size and shape is not a crime, it's a right," she added.

Fellow Sports Illustrated model Chrissy Teigen made headlines this month for sharing a photo of her stretch marks. The 31-year-old model welcomed her first child, daughter Luna, with husband John Legend in April. 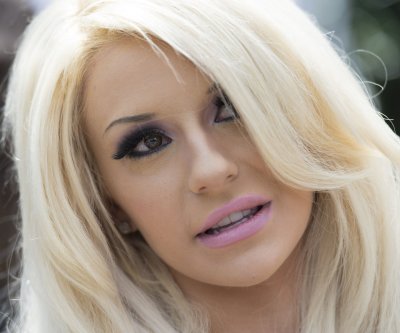