President Barack Obama leaves after holding a press conference at the White House on Monday. Obama named 21 recipients of the Presidential Medal of Freedom on Wednesday, including entertainers such as Tom Hanks and Ellen DeGeneres, athletes Michael Jordan and Kareem Abdul-Jabbar and Bill and Melinda Gates among others. Photo by Kevin Dietsch/UPI | License Photo

"The Presidential Medal of Freedom is not just our nation's highest civilian honor -- it's a tribute to the idea that all of us, no matter where we come from, have the opportunity to change this country for the better," Obama said. "From scientists, philanthropists, and public servants to activists, athletes, and artists, these 21 individuals have helped push America forward, inspiring millions of people around the world along the way."

Hopper, also known as "Amazing Grace" and "the first lady of software," was honored for her role in creating the first compiler by making coding languages more practical and accessible by translating source code from one language into another.

Bill and Melinda Gates were also honored for their philanthropy through the Bill & Melinda Gates Foundation, which they founded in 2000 to promote healthy, productive lives throughout the world including fighting hunger and extreme poverty in developing countries.

The recipients will be presented with the award on at the White House on Nov. 22 in an event that will be live-streamed on the White House's website.

Movies // 20 minutes ago
Jennifer Lawrence attends 'Don't Look Up' premiere amid pregnancy
Dec. 6 (UPI) -- Jennifer Lawrence walked the red carpet ahead of the birth of her first child with Cooke Maroney. 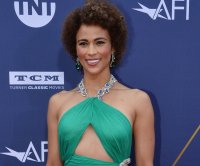