Gigi Hadid: 'I felt I was in danger' during Milan attack and fought back

"I had every right to react the way I did," the model asserted.

Gigi Hadid (R) and Zayn Malik at the Costume Institute Benefit at the Metropolitan Museum of Art on May 2. The model was ambushed Thursday during Milan Fashion Week. File Photo by John Angelillo/UPI | License Photo

The 21-year-old model defended elbowing Vitalii Sediuk in the face after the notorious Ukrainian prankster ambushed her during Milan Fashion Week on Thursday.

"Honestly, I felt I was in danger, and I had every right to react the way I did," Hadid told Lenny Letter. "If anything, I want girls to see the video and know that they have the right to fight back, too, if put in a similar situation."

"Practicing self-defense is important so that when you're in the moment, reacting from muscle memory comes more naturally to you than freezing up," she advised. "Confidence in your own ability to defend yourself comes with educating yourself about it, and is a massive advantage when in an unsafe situation."

Hadid and her sister, Bella Hadid, were leaving the Max Mara show Thursday afternoon when Sediuk grabbed Hadid from behind and lifted her off her feet. The model managed to escape his grip by delivering a blow to his head.

"I'm a human being -- and had every right to defend myself," she tweeted to her 3 million followers after the incident. "How dare that idiot think he has the right to man-handle a complete stranger. He ran quick tho."

Sediuk has ambushed a number of other celebrities in the past five years, including Will Smith, Leonardo DiCaprio, America Ferrera and Kim Kardashian. He tackled Kardashian at Paris Fashion Week in 2014. 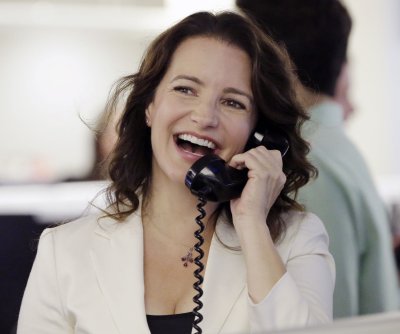 Entertainment News // 14 hours ago
Meghan Trainor's dad hit by car, hospitalized
Feb. 23 (UPI) -- Singer Meghan Trainor's father is recovering from injuries he sustained when he was hit by a car this weekend.