Brad Pitt arrives on the red carpet for the New York premiere of "The Big Short" at the Ziegfeld Theatre on November 23, 2015 in New York City. The FBI has released a statement regarding Brad Pitt's alleged child abuse incident. File Photo by John Angelillo/UPI | License Photo

BURBANK, Calif., Sept. 23 (UPI) -- The FBI has released a statement confirming that they will "evaluate" claims that Brad Pitt committed child abuse while on his private jet.

"In response to your inquiry regarding allegations within the special aircraft jurisdiction of the United States; specifically, an aircraft carrying Mr. Brad Pitt and his children, the FBI is continuing to gather facts and will evaluate whether an investigation at the federal level will be pursued," the FBI said to Us Weekly.

The response comes after initial reports from TMZ that the LAPD and L.A. County Department of Children and Family services was investigating Pitt who was reported as being "verbally abusive" and "physical" with one of his kids while onboard a private jet with his family and estranged wife Angelina Jolie.

"LAPD is not handling any report or allegations into child abuse for Mr. Brad Pitt," noted a spokesperson for the department Thursday.

A source close to the actor has stated that "He takes the matter very seriously and says he did not commit any abuse on his children."

Children and Family Services has yet to issue a statement regarding the originally reported investigation.

On Monday, Jolie filed for divorce from Pitt citing irreconcilable differences after they had been together for over a decade. Jolie is said to not be seeking spousal support and is requesting sole custody of the children with Pitt getting visitation rights and joint legal custody.

Pitt and Jolie share six children together, 15-year-old Maddox, 12-year-old Pax, 11-year-old Zahara, 10-year-old Shiloh and 8-year-old twins Knox and Vivienne. In a statement, Pitt noted, " I am very saddened by [the divorce], but what matters most now is the well-being of our kids. "I kindly ask the press to give them the space they deserve during this challenging time."

Rumors began to spread that the marriage was ending due to the actor having an affair with Marion Cotillard during the filming of their upcoming WWII drama, Allied. Cotillard dispelled those reports however in a lengthy Instagram post.

Music // 2 hours ago
Seventeen share 'Chapter7:teen' video on 7th anniversary
May 25 (UPI) -- K-pop group Seventeen released a special video for fans in honor of its seventh anniversary as a group.

Entertainment News // 4 hours ago
Laverne Cox celebrates launch of her own Barbie doll: 'I am so honored'
May 25 (UPI) -- "Orange is the New Black" actress Laverne Cox is the latest celebrity to have a Barbie doll made in her likeness.

TV // 5 hours ago
'This is Us' creator, stars celebrate series finale: 'It's been the trip of a lifetime'
May 25 (UPI) -- "This is Us," a family drama starring Milo Ventimiglia and Mandy Moore, ended Tuesday after six seasons on NBC.

Entertainment News // 7 hours ago
Stars react to Texas school shooting: 'Filled with rage and grief'
May 25 (UPI) -- Celebrities are reacting on social media to the Texas elementary school shooting that has left 19 students and at least two adults dead. 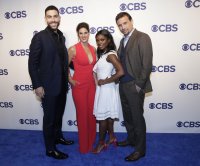