RIO DE JANEIRO, Aug. 3 (UPI) -- The opening ceremonies for the 2016 Olympics will kick off in Rio on Friday, and Ralph Lauren has issued a first look at Team USA's uniforms.

The outfit consists of white skinny jeans, a white shirt with red and blue blocking, and a navy blue blazer with the white Polo emblem on one side and the U.S. Olympic Team patch on the other side. The gold buttons feature American flags and Olympic rings.

Swimmer Michael Phelps, the flag bearer for the opening ceremony, will stand out from the rest of the team in a light-up version of the blazer that features an illuminated Olympic patch on the front and "USA" on the back.

Introducing the Official 2016 #TeamUSA Opening Ceremony uniforms, including the first-ever illuminating Flag Bearer Jacket, which makes its debut on the @Todayshow this morning. #RoadtoRio From 7/29/16 to 8/6/16, like or share a post with the hashtag #LikeToLight on Instagram, Twitter, or Facebook & The PRL Fdn. will donate $1 (up to $100K total) to Team for Tomorrow, the USOC’s community outreach program. Click bio link for program rules.

Ralph Lauren has made the ensemble available for purchase on its website where the entire outfit --including the available accessories like the $350 red, white, and blue boat shoes -- can be purchased for $1,500.

The closing ceremony uniforms were revealed in April and were met with mixed reviews, with some critics saying the look was reminiscent of prep school uniforms. 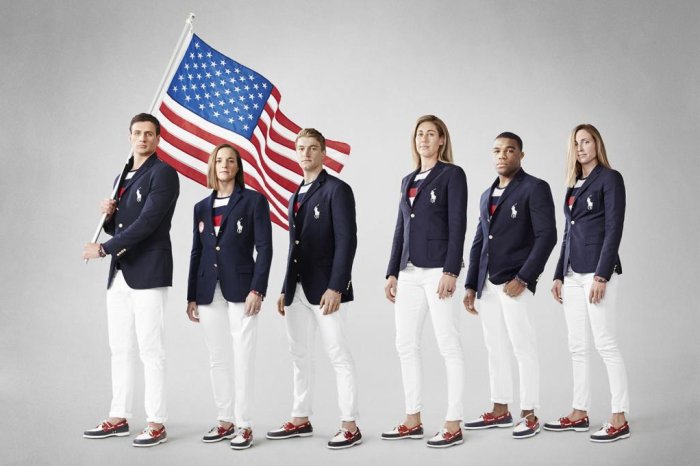 Ralph Lauren's Team USA Rio Olympics uniforms will feature the letters "USA" in electroluminescent panels on the back of the flag-bearer's jacket. Photo via Ralph Lauren

Ralph Lauren has been dressing Team USA since 2008 and puts the United States in a category with other countries who are dressed by major designers like Giorgio Armani for Italy, Stella McCartney for Britain, H&M for Sweden, and, the newcomer to the Olympic fashion scene, Christian Louboutin who is designing exclusively for Cuba.

South Korea is taking a more practical approach with its uniforms by incorporating mosquito repellant into the clothes amid concerns of the mosquito-spread Zika virus.

The opening ceremony will be broadcast on NBC on Friday at 7 p.m.