Actor Anton Yelchin, the voice of Clumsy Smurf in the motion picture animated comedy "The Smurfs 2," attends the premiere of the film in Los Angeles on July 28, 2013. File photo by Jim Ruymen/UPI | License Photo

LOS ANGELES, June 19 (UPI) -- Dozens of Hollywood stars took to social media Sunday to express their shock and grief over the apparent mishap that left 27-year-old actor Anton Yelchin dead in the driveway of his home.

"You were brilliant. You were kind. You were funny as hell. And you weren't here nearly long enough. Missing you... J.J.," J.J. Abrams said in a message posted on his Bad Robot production company's Twitter account.

"Sad news for such a talented young man. Condolences to the family of Anton Yelchin," William Shatner tweeted.

"This is unreal. Anton Yelchin is such a talent. Such a huge loss," Anna Kendrick lamented.

"Devastated to hear about the brilliant Anton Yelchin. He was thoughtful, kind, and gifted. My thoughts and prayers are with his family," remarked Chris Evans.

"Anton Yelchin was a bright, brilliant talent, and a truly kind person. I was so taken by him, and won't ever forget his sweet smile. RIP," Olivia Wilde commented.

"I didn't know him well.I worked with Anton Yelchin he was a hard worker and wonderful actor.My heart goes out to his parents and loved ones," offered Vincent D'Onofrio.

"Anton... What a rare and beautiful soul with his unstoppable passion for life," Jodie Foster said in a statement to The Hollywood Reporter. "He was equal parts serious thinker and the most fun little brother you could ever dream of. I am so honored to have been able to direct such a deep actor, so committed and genuine. I will forever be grateful for all of those little exchanges we shared, his contagious enthusiasm, his questions, his company. My heart breaks for his mom and dad who were a part of every anecdote. He carried their love into everything he touched."

Anton Yelchin was a bright, brilliant talent, and a truly kind person. I was so taken by him, and won't ever forget his sweet smile. RIP

Yelchin's screen credits include Taken, Along Came a Spider, Hearts in Atlanta, Huff, Terminator Salvation, Fright Night, Like Crazy, House of D, Alpha Dog, The Beaver and the Star Trek re-boot franchise. He was recently announced as a member of the voice cast of the animated series Trollhunters.

Los Angeles police said Yelchin was killed early Sunday when he apparently got out of his vehicle and it rolled over him and pinned him against a brick mailbox pillar attached to a security gate.

Entertainment News // 2 minutes ago
Britney Spears, Sam Asghari 'moving forward' after pregnancy loss: 'It's hard but we are not alone'
May 17 (UPI) -- Sam Asghari thanked fans for their support following news his fiancée, Britney Spears, experienced a miscarriage.

Movies // 31 minutes ago
Tom Blyth to play young Coriolanus Snow in 'Hunger Games' prequel
May 17 (UPI) -- "Billy the Kid" actor Tom Blyth will star in the "Hunger Games" prequel film "The Ballad of Songbirds and Snakes." 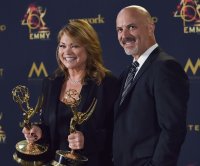 Entertainment News // 3 hours ago
Sasha Banks, Naomi walk out on 'Raw,' WWE issues statement
May 17 (UPI) -- Women's Tag Team Champions Sasha Banks and Naomi left the Scope Arena in Norfolk, Va., during WWE's broadcast of "Raw" after the duo was advertised for the main event.