The couple married in Puerto Vallarta, Mexico, in 2014.

Carlos PenaVega (L) and Alexa PenaVega at the Los Angeles premiere of "Spare Parts" on January 8, 2015. The couple are expecting their first child. File Photo by Phil McCarten/UPI | License Photo

The 26-year-old actor and 27-year-old actress announced the news Thursday on social media. The couple, who were born Carlos Pena and Alexa Vega, married in 2014 and blended their surnames after their wedding.

"There is going to be a new cool kid in town... And by cool I mean dorky just like their father. A little PenaVega is on the way!!! #ItsHappening #HolyWow #Imgoingtobeadaddy," Carlos wrote on Instagram.

"I cannot believe I finally get to say this... we're pregnant!!! It's #ClearblueConfirmed that a little blessing is joining the PenaVega family!!! We can't wait!!! #ItsHappening #HolyWow #LosForDaddyOfTheYear," Alexa added on her own account.

The PenaVegas recently became the first married contestants to compete on Dancing with the Stars. The pair faced off in Season 21, with Carlos and Witney Carson coming in fourth place and Alex and Mark Ballas in fifth.

"I love him so much," Alex wrote of Carlos in a blog post during the competition. "We just have such a strong and amazing relationship. I couldn't have asked for a better journey than to be doing this with him."

Carlos previously told Latina magazine he and Alexa are "life friends" who "love just being with each other." The actor is known for playing Carlos Garcia on Nickelodeon's Big Time Rush, while Alexa portrayed Cameron Cortez in the Spy Kids movies. 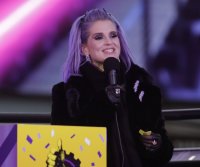 TV // 40 minutes ago
'The Wheel of Time' trailer shows Rosamund Pike wield magic as Moiraine
Oct. 28 (UPI) -- "The Wheel of Time," a new series based on the Robert Jordan fantasy book series, is coming to Amazon Prime Video in November. 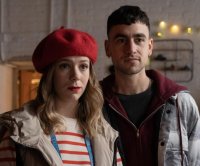 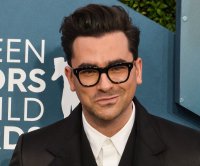 TV // 1 hour ago
Dan Levy says 'Ew, David' catchphrase will 'haunt' him for the rest of his life
Oct. 28 (UPI) -- Dan Levy discussed the "Ew, David" catchphrase from "Schitt's Creek" and his latest book on the series while appearing on "Jimmy Kimmel Live."