The model and husband John Legend are expecting their first child.

The 30-year-old model and mom-to-be was fêted at a star-studded party hosted by friend and reality star Kim Kardashian. Teigen is expecting her first child with husband John Legend, who was also present at the shower.

Kardashian's mom, Kris Jenner, and sisters, Kourtney Kardashian and Khloe Kardashian, were among the other guests in attendance. Sportscaster Erin Andrews and actresses Jenna Dewan and Minka Kelly were also spotted.

The party combined extravagant decorations with cheap and indulgent food, including McDonald's breakfast items. Guests played a lullaby-themed game, danced in the kitchen and shared plenty of photos on social media.

"Mcmuffins, frosties, taco bell...i cannot handle what happened today. overwhelmed with gratitude and love. this baby is too lucky!" Teigen tweeted. "I've officially had more showers than i've attended. i have the greatest friends on this entire planet."

"I always wanted to be the person who showed off the bump because it looks beautiful and I think you should embrace it," the model said. "Kim does tat well and I love seeing that belly of hers and I know Kanye does too -- we're lucky to be with men who find pregnancy sexy." 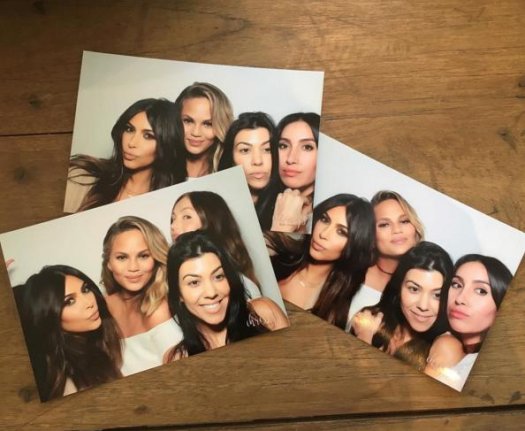 Chrissy Teigen celebrated her daughter's impending birth at a baby shower with the Kardashians. Photo by Kourtney Kardashian/Instagram

Teigen and Legend married in 2013 and announced they're expecting their first child in October. The couple celebrated at a first baby shower March 6 in New York with models Brooklyn Decker and Petra Nemcova in attendance.

TV // 26 minutes ago
'Spy Among Friends' to stream on MGM+ in the United States
Nov. 29 (UPI) -- MGM+ announced Tuesday that it has picked up the British crime drama "A Spy Among Friends" and plans to release it in 2023.

TV // 1 hour ago
Will Smith addresses his Oscars 'rage' during 'Daily Show' visit
Nov. 29 (UPI) -- Will Smith continues to express regret over slapping comedian Chris Rock for a joke he made about Smith's wife at the Oscars ceremony earlier this year.

Music // 20 hours ago
Itzy dance in 'Cheshire' music video teaser
Nov. 28 (UPI) -- K-pop stars Itzy released a preview of their video for "Cheshire," the title track from their EP of the same name.