The reality star and wife Teresa Giudice were sentenced for fraud in 2014.

Giudice and Teresa Giudice were sentenced to 41 and 15 months in prison, respectively, in October 2014. The couple were allowed to serve their terms separately on account of their four children, and Teresa Giudice completed an 11-month stint in December.

Giudice spent his final days of freedom with his wife, their daughters and other family and friends. The couple hosted a going-away party Monday at the Blu Alehouse restaurant in Riverdale, N.J., with 75 guests in attendance.

"It was a very light and fun night," a source told Entertainment Tonight. "Everyone was laughing and joking. There were a lot of kids running around ... It was a very low-key, private and a lot of fun."

"There were tears, laughter, joking, a lot of hugs," the insider added. "People were crying when they were saying goodbye to him. There was no one that wasn't invited there. No fans or press. It was small and intimate."

Giudice and Teresa Giudice married in 1999 and share 15-year-old Gia, 11-year-old Gabriella, 10-year-old Milania and 6-year-old Audriana. Teresa Giudice recently told InTouch Weekly she will miss her husband "tremendously" while he is gone.

"We will all help each other get through this," she said of her daughters. "He's the love of my life. He was there for me and I'm going to be there for him." 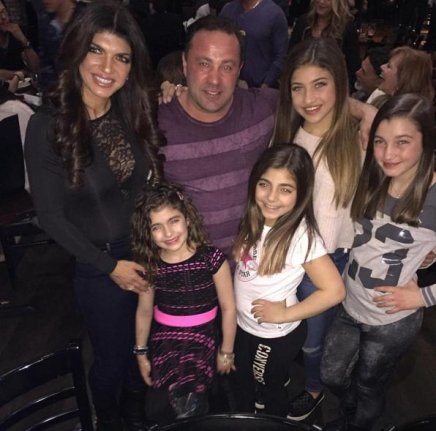 Giudice and his family came to fame on Bravo series The Real Housewives of New Jersey. The show will return for a seventh season in the summer with Teresa Giudice, her sister-in-law, Melissa Gorga, and Jacqueline Laurita.