Joey had been under hospice care for the last several months after doctors told her the cervical cancer she had was too aggressive to treat.

Her husband chronicled her last days with him and their 2-year-old daughter Indiana on his This Life I Live blog.

"My wife's greatest dream came true today. She is in Heaven," Rory said in a Facebook post with a link to his blog and a video tribute to his cherished spouse.

"a dream come true" - a blog post and video from one man's extraordinary, ordinary life. http://thislifeilive.com/a-dream-come-true/

"The cancer is gone, the pain has ceased and all her tears are dry. Joey is in the arms of her beloved brother Justin and using her pretty voice to sing for her savior. At 2:30 this afternoon, as we were gathered around her, holding hands and praying.. my precious bride breathed her last. And a moment later took her first breath on the other side," Rory wrote.

"Though this is, and has been, a time of many tears of sorrow, it has also been a time of countless tears of joy. There have been too many beautiful moments to count or even begin to share in this blog. But I try. When a person has been through as much pain and struggle as Joey's been through, you just want it to be over. You want them to not have to hurt anymore, more that you want them to stay with you. And so, it makes the hard job of saying goodbye just a little easier.

"After four-and-a-half months in Indiana, we will soon be back home in Tennessee. Me, and our little one, with our older daughters. It's hard for me to imagine being there without Joey, but at the same time... it is where she wants us to be. It's where she will be... She's gonna be in the mint growing beside our back deck, the sweet-corn frozen in our freezer and a million other places that her hand and heart has touched around our little farmhouse and community. Joey will still be with us. Everywhere. So if it's okay, I'm gonna close, wipe my tears and pack our bags to hit the road headed south. She's already got a head-start on me." 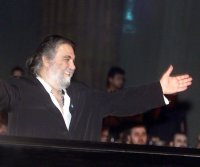 TV // 8 hours ago
'Lovesong': Starz developing new series from 'Vida' creator
May 19 (UPI) -- "Lovesong," a new drama from "Vida" creator Tanya Saracho, is in the works at Starz.

Movies // 8 hours ago
What to binge: 5 movies to watch after 'Senior Year'
May 19 (UPI) -- "Night School," "Billy Madison" and "Never Been Kissed" are a few films about adults returning to school to watch after Netflix's "Senior Year."

Music // 9 hours ago
Twice perform 'The Feels' on 'The Late Show'
May 19 (UPI) -- K-pop stars Twice performed "The Feels," their first English-language single, on "The Late Show with Stephen Colbert."

TV // 10 hours ago
'Riverdale': The CW series to end with Season 7
May 19 (UPI) -- "Riverdale," a teen drama starring KJ Apa, Lili Reinhart, Camila Mendes and Cole Sprouse, will end with a seventh and final season.
Advertisement