Roseanne Barr awaits the start of the unveiling ceremony honoring Dick Gregory with the 2,542nd star on the Hollywood Walk of Fame in Los Angeles on February 2, 2015. Barr is reportedly refocusing her energy on investing in cannabis in California. File Photo by David Silpa/UPI | License Photo

The 63-year-old comedian and one-time presidential nominee is reportedly opening her own weed dispensary in Santa Ana called "Roseanne's Joint," which will sell unique strains and products.

Much like Snoop Dogg's line of weed edibles, Barr's will produce THC-infused chocolates and macadamia nut sweets from her farm.

"I'm proud to be a cultural pioneer at the forefront of another wave of progress! And we're proud of the city of Santa Ana as we continue to move into the era of recognizing cannabis as the natural, therapeutic, herbal substance medical science has proven it to be," Barr said in a statement, according to the Orange County Register.

"Roseanne's Joint will be a responsible, contributing member of, and addition to, the community," she added.

Barr reportedly revealed last year she is using medical marijuana to ease the symptoms of glaucoma and macular degeneration which are attributed to her weakening eyesight. 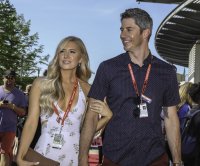