Hubert's recent criticism of the Smiths stems from the couple's choice to abstain from taking part in this year's Academy Awards ceremony in response to the lack of diversity among nominees.

After Pinkett Smith released a video explaining her disapproval of the Academy's choices, Hubert reacted in January saying it was "ironic that somebody who has made their living, and made millions and millions of dollars from the very people you're talking about boycotting just because you didn't get a nomination, just because you didn't win. That is not the way life works, baby."

During her appearance on The Real, Hubert explained a bout of ongoing tension between her and the Smiths, which adds depth to her public disapproval.

"Janet Hubert was never difficult on that set. Janet Hubert was so professional, it wasn't even funny," Hubert said, speaking of herself in the third person about her stint as Aunt Viv in the popular 1990s sitcom Fresh Prince of Bel Air.

Mentioning Will Smith's alleged involvement in Hubert's forced exit from the show, the actress suggested at the time "Will simply needed to win and I think sometimes when you get caught up in a lie and those things never happened. She never left the set. I never left the set. We got along great."

"I stand up for other actresses, other people. The Smiths just irked me because they are such pretenders, and everything is a photo op."

She believes part of the reason the famed couple is opting out, is because Will Smith did not get nominated for his performance in Concussion.

Entertainment News // 22 hours ago
Jimmy Kimmel shares photo of results from Thanksgiving mishap
Nov. 26 (UPI) -- Jimmy Kimmel posted a photo on Instagram showing the results of a mishap he had while cooking his Thanksgiving feast. 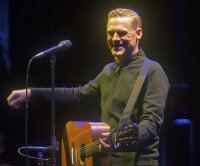