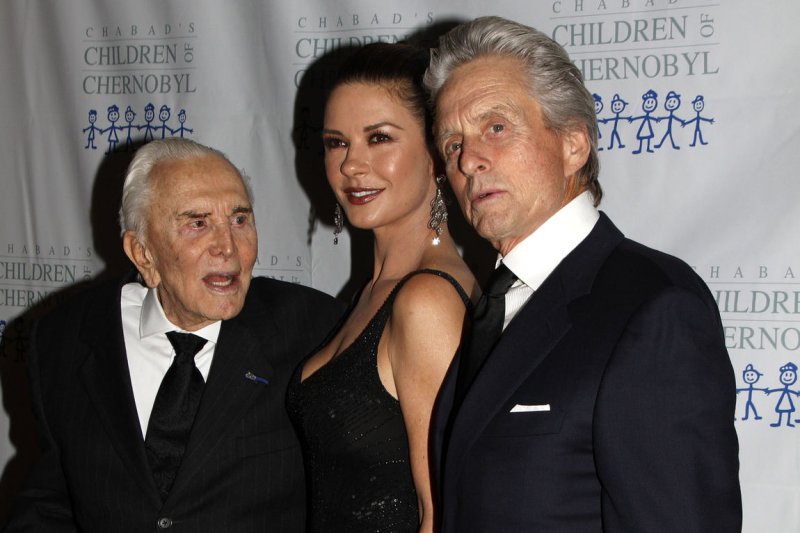 The 71-year-old actor marked the occasion by sharing a sweet photo of himself with the legendary film star on Facebook, writing, "Happy 99th Birthday Dad! I love you, Michael." Photographer Chris Briscoe shot the picture at Kirk Douglas' 60th wedding anniversary party.

Douglas' wife, 46-year-old actress Catherine Zeta-Jones, also posted a kiss photo to convey her well wishes. "Happy Birthday to my dearest Father in Law, Kirk. 99 years young today. I love you with all my heart," she captioned the snapshot.

Michael Douglas is the son of Kirk Douglas and actress Diana Dill, who died at age 92 in July. The actor and his dad appeared on Entertainment Tonight prior to Kirk Douglas' 98th birthday last year, where the elder Douglas told Nancy O'Dell he'd like "to live to 100."

"It's an inspirational career," Douglas said of his father's 40 years in films. "He's probably one of the last of his great generation ... Dad's history was that his father was not there. The one thing that he wanted to make sure that he did was to make that effort for his sons."

Kirk Douglas is best known for such films as Lust for Life (1956) and Spartacus (1960) and originated One Flew Over the Cuckoo's Nest on Broadway.

Bret Michaels thanks fans for support after hospitalization