Johnny Carson goes through his monologue during the 56th annual Academy Awards in Hollywood on April 9, 1984, where he was the Master of Ceremonies. Carson hosted the 'Tonight Show' for thirty years. File photo by Mike Hill/UPI | License Photo

Tennis-loving Johnny Carson and his wife Alexis share a light moment Aug. 1, 1999 after watching Pete Sampras prevail over Andre Agassi in the final match of the Mercedes-Benz Cup at UCLA in Los Angeles. Carson died in early 2005. Photo by Jim Ruymen/UPI | License Photo

Talk show host Johnny Carson, shown in this undated photo, who hosted NBC's Tonight Show for thirty years, died at the age of 79 from complications due to emphasyma at his home in Malibu on January 23, 2005. Carson walked away from the show in 1992 and never returned. Carson is survived by his wife Alexis and two sons Christopher and Cory. Photo courtesy of NBC | License Photo

Full episodes of the Tonight Show Starring Johnny Carson first aired between 1972 and 1992 will again meet the small screen beginning Jan. 1 on Antenna TV. Variety reports the channel made a multi-year deal with Carson Entertainment Group allowing it to air hundreds of hours from Carson's 30-year stint as host of the show.

The reruns will be simply dubbed Johnny Carson since The Tonight Show name is still owned by NBC, the outlet says. The show returns to compete with current late-night headliners Stephen Colbert, Jimmy Fallon, Conan O'Brien and Jimmy Kimmel.

Sean Compton, Antenna TV parent company Tribune Media's president of strategic programing and acquisitions, told Variety that the re-airing won't be a clip show. "This is full episodes of Johnny Carson, the man that everyone in late-night agrees was the greatest host of all time, airing in real time as he did back in the day."

"Tuning into The Tonight Show is like taking a walk down Main Street Disneyland. The minute you step in there, you feel good and you know it's a place you want to stay," he continued. "We cannot wait to bring this show to fans who remember Carson and to a new generation of viewers who have never had the chance to see Johnny in his prime." 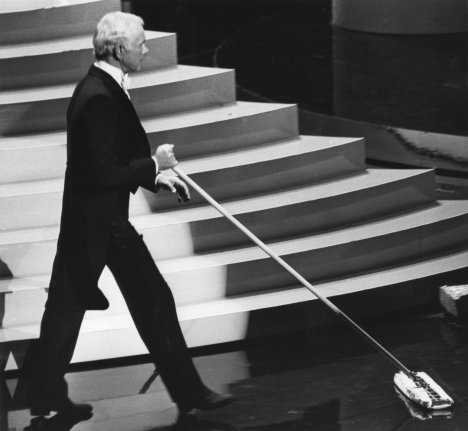 Master of Ceremonies Johnny Carson sweeps the stage at the 56th Annual Academy Awards on April 9, 1984 in Hollywood. Carson performed the prank to entertain the audience during a commercial break in the telecast. (UPI Photo/Mike Hill/Files)

The famed television host died in 2005 at the age of 79. He took over the Tonight Show from Jack Paar in 1962 and interviewed around 25,000 guests. Carson won 40 Emmy awards during his time as host.

Jay Leno took Carson's reigns as host of The Tonight Show in 1992, three days after his retirement. In 2014, comedian Jimmy Fallon stepped in for Leno.