LOS ANGELES, Dec. 15 (UPI) -- Ashton Kutcher discussed the upcoming series finale of Two and a Half Men and Charlie Sheen's possible cameo on it during a visit to The Ellen DeGeneres Show.

In a clip of the show posted Saturday, Kutcher tells DeGeneres he has just been pitched the final episode and admits he's probably not allowed to talk about it.

When DeGeneres asks if Sheen will appear on the finale, the 36-year-old actor makes an incredibly awkward face that promptly leads the host to affirm that, Sheen will be back.

"I didn't say anything," responded Kutcher, before adding, "If you're working in the Warner Brothers lot and there's sirens come save me."

DeGeneres predictions are not as far fetched as they might seen as Sheen told TV Guide in September that he reached out to series creator Chuck Lorre about his character Charlie Harper returning for the series finale.

The Two and a Half Men finale will air on Feb. 19. 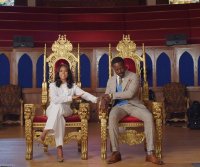 Movies // 8 hours ago
Sundance movie review: 'After Yang' is a touching exploration of attachment
LOS ANGELES, Jan. 24 (UPI) -- The sci-fi film "After Yang" explores a family's attachment to an android, and the grief with which they cope after he breaks down.

TV // 9 hours ago
'And Just Like That' cast talk bringing diverse stories to series on 'Drew'
Jan. 24 (UPI) -- "And Just Like That" stars Nicole Ari Parker, Karen Pittman and Sarita Choudhury discussed how the "Sex and the City" sequel series introduced new characters of color while appearing on "The Drew Barrymore Show."