'Munsters' star Butch Patrick plans to save a haunted mansion

The "haunted" Victorian mansion belonged to his late aunt.

MACON, Mo., April 17 (UPI) -- The Munsters star Butch Patrick plans to save an old Victorian mansion he says is haunted.

The 60-year-old actor portrayed Eddie Munster on the spooky 1960s show, and says he is no stranger to the supernatural. He plans to save his late aunt's home in Macon, Mo., and has reportedly discovered the house is haunted.

"Every 20 years or so I would drive by the house to visit and last time I went by, I found it was in foreclosure and it was close to being wrecked," Patrick tells FOX News. "I'm working with the banks to try and save it and lo and behold, it turns out it's haunted."

The star says his grandmother and sister have both experienced paranormal activity in the house, but he himself never noticed anything unusual... until now.

"I had some experts come in and they found, like, 13 entities in the house," Patrick reports.

The actor has an avid interest in the supernatural, and has visited several haunted locations in the U.S., including the Roosevelt Hotel and the Whaley House. He says he has "felt some interesting things going on" -- including "something [passing] through" his body -- but has "never actually physically seen something."

Patrick plans to write a "coffin-table book" with fan stories about The Munsters sometime in the near future.

TV // 2 hours ago
TV review: 'Stranger Things' Season 4 impresses with teenage drama
LOS ANGELES, May 23 (UPI) -- "Stranger Things" Season 4 shows dramatic progressions in the storylines and performances, but it's still just as scary and exciting as before. 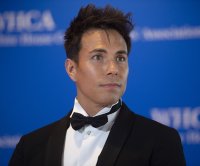